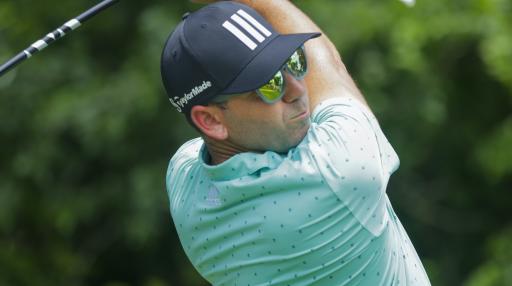 Sergio Garcia matched the early pace set by Jordan Spieth by carding a 63 on day one at the Charles Schwab Challenge.

The Spaniard, who won his first-ever PGA Tour title at this event in 2001, has missed his last four cuts but he put that poor form behind him at Colonial Country Club on Thursday.

The 41-year-old completed his first nine holes in 3-under-par and he began his back nine in scintillating fashion with a birdie on the 10th hole and an eagle at the par-5 11th hole.

Bunker bottom of the cup.

Garcia found himself in the greenside bunker for his third shot on this 620-yard hole, but he hit a great shot out of the hazard into the hole which was a highlight of his round.

Garcia added another birdie to sit at the top of the leaderboard with Spieth, who also fired a round of 7-under-par to set a clubhouse lead in Fort Worth.

Spieth, playing alongside PGA Champion Phil Mickelson and defending Charles Schwab Challenge champion Daniel Berger, started his round superbly with a birdie on the 10th hole and he didn't look back from there.

The Texan was 3-under-par heading into his second nine, in which he added another four birdies, including three consecutive birdies in his final three holes.

His round was highlighted by a superb chip-in birdie on the par-3 8th hole, which took him to 6-under-par for the round. The 27-year-old won this tournament in 2016 and has finished second twice as well, so he has a clear affinity for Colonial Country Club.

Off the back of his history-making win at Kiawah Island, Mickelson came back down to earth on Thursday with a 3-over-par round of 73 to finish 10 shots behind Spieth.

The 50-year-old made five bogeys and two birdies in the first round in Texas, which was in stark contrast to his superb play at the PGA Championship last week.

Lefty has won this tournament twice in his career, in 2000 and 2008, so he will be hoping for a better round on Friday if he is to become only the second player to win the tournament at least three times alongside Ben Hogan.

NEXT PAGE: TIGER WOODS ON CAR CRASH INJURIES: "THIS HAS BEEN AN ENTIRELY DIFFERENT ANIMAL"