Shane Lowry revealed the details of his accidental putter break in the first round of the CJ Cup on Thursday which Matt Fitzpatrick saw the funny side of. 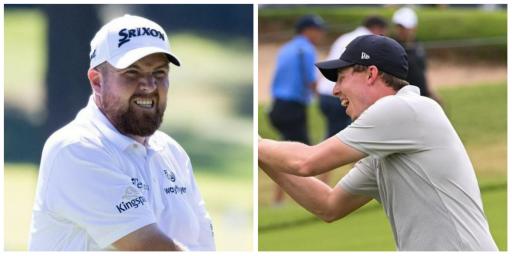 Shane Lowry has finally revealed how he broke his putter in the first round of the CJ Cup with no mercy shown by his playing partner Matt Fitzpatrick.

The 2019 Open champion attempted to kick his putter back up to his hands after it fell out of his bag on the 9th hole at Congaree Golf Club and the club completely snapped in half. He didn't have the luck of the Irish on this occasion.

As he saw his club break in two, his playing partner Fitzpatrick couldn't hold in his hysterical laughter. As Lowry said, it was a "very, very strange" way to snap a club without any anger involved.

He was forced to use the putter another 14 times for the remaining nines holes of his round. Having travelled for an hour to the PGA superstore in Bluffton, he got a new Odyssey White Hot OG 2-ball which helped him shoot a 67 on Friday. He is tied sixth and four shots behind Jon Rahm and Kurt Kitayama.

"I was pulling my putter out of the bag and I pulled it out quite quick and as it came out, it fell," Lowry said after the second round.

"It was absolutely accidental, there was no anger or anything. It was like very, very strange. It was disappointing because I like that putter, that's the one I won with a few weeks ago and I kind of was starting to like it.

"Odyssey were very good to me, they sent one to PGA Tour Superstore down in Bluffton, which is like an hour away, so I got in the car after the round and I drove down there, and then I bought another one just to be safe, just to have an extra one there just in case we didn't get on too well."

Lowry posted a picture on social media of himself outside the superstore, delighted and relieved with his purchase. He didn't get a discount and paid the full $229 twice.

This is the 35-year-old's first appearance on the revamped 2023 Tour schedule after winning the BMW PGA Championship at Wentworth in September.