Three-time PGA Tour winner Kim may soon have to see out his two-year military commitment... 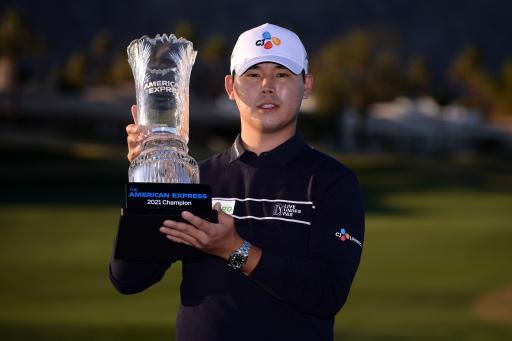 Fresh off landing his PGA Tour hat-trick at The American Express, Si Woo Kim admits he may soon have to leave the PGA Tour to see out his two-year military commitment - a requirement of all South Korean males aged between 18 and 28.

"I didn't do the service yet, but I'm planning on it as a Korean, but I don't know when I will go there - so that's my answer," said the 25-year-old, who vaults up to 48th in the world rankings following his one-stroke victory over Patrick Cantlay on Sunday.

There are certain exemptions for South Koreans seeing out the two years of military training such as winning medals at an Olympic Games, or gold medals at the Asian Games.

In these instances of winning a medal, athletes are asked to do four weeks of basic military and obligated to attend a few days of annual military training for six years.

RELATED: IS GOLF ABOUT TO RETURN IN ENGLAND NEXT MONTH?

Kim had initially asked if his Players Championship victory at TPC Sawgrass in 2017 would count towards such exemption, but that has not been accepted.

"I really wish we could have that benefit," said Kim. "However, regardless of me winning this tournament, I really have to go to the military service, and I've already decided I'm going to go, too, so I'm ready for that."

Some of you may recall South Korea's Sangmoon Bae having to leave the PGA Tour to see out his two years of military service - READ HERE.