Justin Thomas sponsor Citibank: "His language was beyond offensive"

Citibank sticking with Justin Thomas but are now working with him to support LGBTQ+ causes... 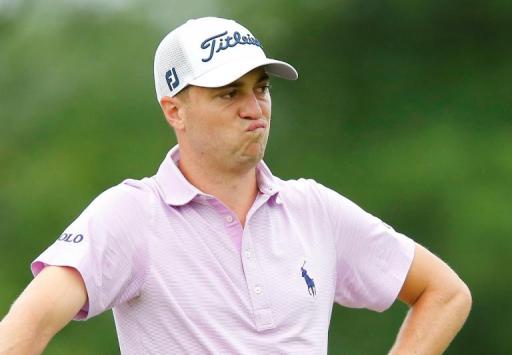 Citibank, one of the sponsors of Justin Thomas, has explained it will be maintaining its partnership with the World No.3 moving forwards, but that the company has voiced strong condemnation over his recent homophobic slur that was caught when missing a putt at the Tournament of Champions in Hawaii.

Thomas, 27, may have apologised for the word he choose to use at Kapalua two weeks ago, but it mattered little where his apparel sponsor Ralph Lauren was concerned as the brand decided to terminate the American's contract with immediate effect.

Citibank has now titled a blog post on its website 'When an Apology is Not Enough' following the incident, and the brand cites Thomas' choice of word as "beyond offensive."

The company has made it clear it will be working with Thomas - who missed the cut at the Abu Dhabi HSBC Championship last week - on supporting LGBTQ+  (lesbian, gay, bisexual, and transgender.causes) and increasing awareness of discrimination.

Citibank adds that it will end its contract with Thomas should he at any point "not be sincere in working toward this goal", and that he will be "donating a meaningful portion of his Citi 2021 sponsorship fee to mutually agreed upon LGBTQ+ organizations."

"One of our Team Citi golfers, Justin Thomas, used an anti-gay slur to describe his own effort after missing a putt," reads the Citibank blog post about Thomas.

"Citi is a strong advocate for the LGBTQ+ community and equality more generally, and we found Justin Thomas' language beyond offensive and in sharp contrast to what we stand for as a company. While he recognized how wrong his language was and apologized, we have made it clear to Justin that an apology alone isn't sufficient.

"We considered terminating our relationship with him. It would send a clear and important message, but we decided to use this moment to work with Justin to try to create change.

RELATED: "JUSTIN THOMAS ONLY HAS HIMSELF TO BLAME FOR LOSING RALPH LAUREN"

"While we have engaged with many in the LGBTQ+ community who agree with our decision, there are some – including some of my Citi colleagues – who believe that anything less than termination undermines our firm’s commitment to the LGBTQ+ community. We strongly considered that perspective and have great respect for it, and balanced it against the opportunity this situation provides to drive a more sustainable effort to shift minds and behavior.

"We want to do more than make it clear that it is wrong to use this word. Instead, we hope our efforts can lead more people to make an affirmative choice not to use this word or others like it – and to speak up when others do – because they understand the impact it can have, including on a friend, colleague or teammate who may be struggling with the decision to disclose their sexual orientation.

"To that end, Citi will work with Justin to use his platform to play an active role in accelerating support for the LGBTQ+ community and to increase awareness of the discrimination this community continues to face."

"In addition, he will donate a meaningful portion of his Citi 2021 sponsorship fee to mutually agreed upon LGBTQ+ organizations," the post continues.

"We will work with Justin, our internal Pride networks and LGBTQ+ organizations to develop an action plan to quickly move this effort forward.

"So there is no doubt, we strongly condemn the use of this homophobic slur by Justin and anyone else, and our actions now should in no way be interpreted as excusing it or even forgiving it.

WATCH: JUSTIN THOMAS APOLOGISES FOR HIS HOMOPHOBIC SLUR AT TOURNAMENT OF CHAMPIONS

"This is not about Justin as an individual, but the view that his influence and this moment of public attention create an opportunity to educate many who are not sufficiently attuned to the discrimination the LGBTQ+ community continues to face and how words, actions and inactions perpetuate that discrimination.

"If at any point we feel that Justin is not sincere in working toward this goal, we will end our relationship with him.

"The strong feelings this situation has evoked among many, including some of my colleagues, weighs very heavily on me. While not everyone will agree with the approach we are taking, I can give you my strongest assurances that this course of action is based on our allyship for the LGBTQ+ community and is backed by my personal commitment to lead the effort necessary to create something positive out of this.

"We hope that even those who would have preferred a different course of action will work with us to make this effort as impactful as possible, inside and outside of Citi."

Thomas' other sponsors Titleist and FootJoy have also decided to continue their partnership with the American moving forwards.