Si Woo Kim reveals why he can no longer break any more golf clubs on the PGA Tour... 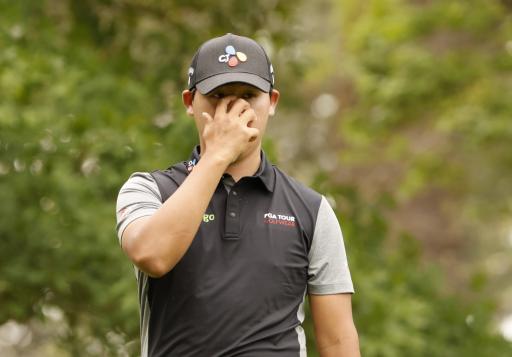 Si Woo Kim has revealed he will need to pay fellow PGA Tour pro Pat Perez $100,000 should he snap another golf club.

Kim, 25, has a past history of snapping golf clubs when reaching boiling point out on the course, reflected none better than snapping his putter in the second round of The Masters two weeks ago - WATCH HERE.

Butch Harmon, the former coach of Tiger Woods, was not surprised in the slightest to see Kim showing his frustration so openly at Augusta National, especially after what his son Claude Harmon III (Kim's coach) had told him.

"He's been known to snap some clubs," said Harmon. "I believe he snapped three of them last week."

Kim was once again in the news last week when he was alleged to have taken too long to allow his ball to fall into the cup.

While the ball did eventually drop into the hole for a birdie, PGA Tour rules official Stephen Cox confirmed it was a par due to the length of time it had taken - WATCH HERE.

Off the back of the incident, GolfWRX posted on Instagram and it was there that Kim responded to a golf fan to let him know just how costly his next club snap will be for his bank balance.

"Shortly after the putt dropped on, Si Woo Kim snapped his putter out of principal," read a golf fan's comment.

Kim, the World No.49, replied: "No more snapped clubs I'm retired that."

He then added a separate post to his Instagram Story with the caption: "I bet Pat Perez if I snapped golf club again I have to pay him 100k."

NEXT PAGE: WAS SI WOO KIM WRONGLY DENIED A BIRDIE AT THE RBC HERITAGE LAST WEEK?