Jon Rahm blasted the setup at The American Express on the PGA Tour last week, so Sir Nick Faldo throws a question his way. Oh yeah, and Rahm had another strop on day two! 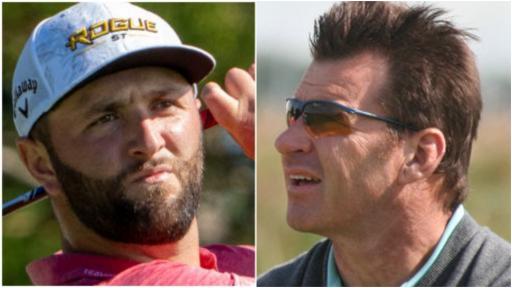 Sir Nick Faldo has hit back at Jon Rahm for complaining The American Express on the PGA Tour was a "f***ing putting contest week".

Faldo, speaking live on air during the second round of the Farmers Insurance Open at Torrey Pines, took the Spaniard to task about his controversial comments by asking him what he made of the Tournament of Champions the week before.

Rahm rued a poor ball striking performance at The American Express when going on to finish tied 14th on 14-under par and nine shots behind winner Hudson Swafford.

Faldo posed the question that we did not hear Rahm moaning when he shot 33-under par in a birdie frenzy at Kapalua the week before at the Tournament of Champions en route to a solo second place behind Cameron Smith.

"So what was Hawaii then," Faldo said during commentary in reference to Rahm's words about The American Express.

"They holed every putt in Hawaii. Now that was a putting contest."

RELATED: JON RAHM STANDS BY HIS CONTROVERSIAL VIEWS ABOUT THE AMERICAN EXPRESS

Rahm just has more tools than everyone else. He’s out here flexing the rare back-to-back-to-back club slam and that’s just something you can’t teach. https://t.co/1KUyWJBcrc

During the broadcast of the second round at Torrey Pines, Rahm then sent a tee shot into the rough on the 2nd hole to which he slammed his new Callaway driver into the turf three times.

Faldo could not understand why he was so angry, especially given he was doing so well in the tournament.

"Top of the leaderboard and he is losing his head," said the English golfing legend.

Frank Nobilo, who was co-commentating with Faldo, added: "I've no problem with that but I think, you know, if we threw clubs we got fined now and again. We all have our bad moments."

Despite claiming to have adopted a fresh mentality and "goldfish" philosophy on the PGA Tour, the World No.1 has cut a frustrated figure in recent weeks.

During round one, Rahm was overheard saying "hey, shut the hell up" in the direction of PGA Tour on-course commentator John Maginnes.