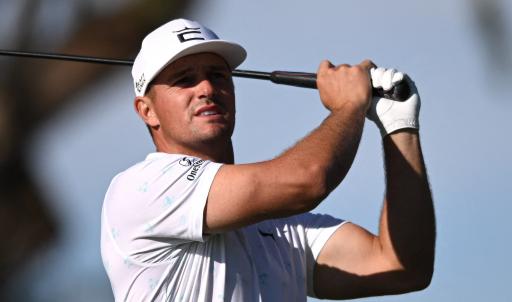 Bryson DeChambeau battled a niggling wrist en route to missing the cut at the Farmers Insurance Open at Torrey Pines on Thursday.

DeChambeau was seen flinching on his left wrist and turning his back to the hole on just about every full shot in the second round.

"I can't play golf today," Bryson was overheard saying when sending his second shot way right of the 12th green.

WATCH: BRYSON'S HILARIOUS EXCHANGE WITH A VOLUNTEER ON THE 15TH HOLE!

It looks like Bryson DeChambeau is a zoo animal and everybody is filming him in his natural habitat.

DeChambeau then found the native area with his tee shot down the par-4 15th and his ball ended up in a horror lie.

He thrashed away at his ball, progressing it some 60 yards into the deep rough while flinching again and sarcastically commenting: "That felt great on my wrist."

RELATED: SIR NICK FALDO HITS BACK AT JON RAHM OVER HIS CONTROVERSIAL COMMENTS

DeChambeau fought through the pain for most of the day - and even managed to hole out from the bunker for birdie at 17 - but ultimately he could only card a level-par 72 to finish 2-under par and one shot shy of the cut mark.

Rickie Fowler and Jordan Spieth, who played alongside DeChambeau for the opening two rounds, also missed the cut.

Tiger Woods holds the record for most consecutive cuts with an incredible 142, set from 1998 to 2005.

DeChambeau tied for 25th in the first event of 2022 on the PGA Tour at the Tournament of Champions and he then withdrew from the Sony Open the following week as a result of his wrist injury.

The World No.9 has been experiencing problems with his left wrist as a result of his ongoing quest to achieve even more speed with his driver.

Given the extent of his current wrist problems, it calls into question whether DeChambeau will still head over to compete in the controversial Saudi International on the Asian Tour next week.

DeChambeau is reportedly going to pick up a huge tournament appearance fee just for competing in the event along with a number of other big name PGA Tour and DP World Tour players.

The latest injury setback will be of great concern for DeChambeau, especially as he looks to get himself in prime condition ahead of the year's first major at The Masters in early April.