It's safe to say that winning the Genesis Invitational was a dream come true for Max Homa. 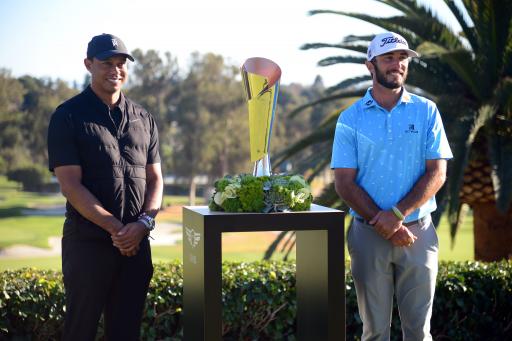 Max Homa posted an incredble tweet about Tiger Woods on Sunday after the 15-time major champion presented Homa with the trophy after he claimed the Genesis Invitational.

It was a thrilling end to this year's Genesis Invitational at Riviera, with Homa beating Tony Finau at the second play-off hole.

Finau put himself in contention with a sensational 7-under par final round of 64 and Homa had a glorious chance to win the tournament in regulation, but missed a short putt at the final hole.

Many believed that it would be Finau's tournament after Homa's tee shot left his ball right next to a tree at the first play-off hole, but the 30-year-old played a wonderful chip shot onto the green and he salvaged a par.

With Finau unable to capitalise on his birdie opportunity, the play-off extended to another hole and this time it was Finau who made the mistake and he paid the price with a bogey, allowing Homa to par his way to victory.

Homa, who is known for being one of the more engaging PGA Tour players to follow on social media, reflected on his win on Twitter, posting about how far he has come since going to Riviera to watch Tiger Woods as a young boy.

I spent over a dozen years trying to get Tiger to give me a high 5 at Riviera and today he handed me a trophy hahaha what a world! #golf

"I spent over a dozen years trying to get Tiger to give me a high 5 at Riviera and today he handed me a trophy hahaha what a world!" said the now two-time PGA Tour winner.

The tweet received thousands of likes and retweets, with hundreds of golf fans replying to congratulate Homa on his achievement, while others had their say Woods after his interview on Sunday night left many pondering his future.

first thing i thought was damn that would be tough to have to walk by Tiger after missing that 3 footer to win but then you hit that shot that defied physics against a tree and then won so the second interaction was probably easier. congrats

I think he’ll play Majors when completely healthy. But, even then, he’s aware that he could find himself in a wheelchair at 55 with one nasty wedge out of US Open rough.

Tiger has nothing else to provide. 2019 Masters, and to a lesser degree BMW, will stand as testimony

Congrats man! You certainly made time for a high 5 for my little guy. Fans for life. pic.twitter.com/ulZEIfHZoR

Sooo...not gonna lie, I had Finau outright winner (on a big number)..u miss a 2 footer (I’m back in), then u make par from a tree (and I’m pissed), then u throw a dart and eventually win...and as much as it pains me - you deserve it, you’re a great dude!

I'm nearly 2x your age, been playing for 50+ years, and I was pulling harder for you than I can remember for any golfer ever. Your resilience after that putt, and that lie on 10, are inspirational. Major props for that, and kudos for the win and making dreams come true!