After a superb opening round 63, Stewart Cink followed it up with yet another 63 on Friday to lead at Harbour Town Golf Links. 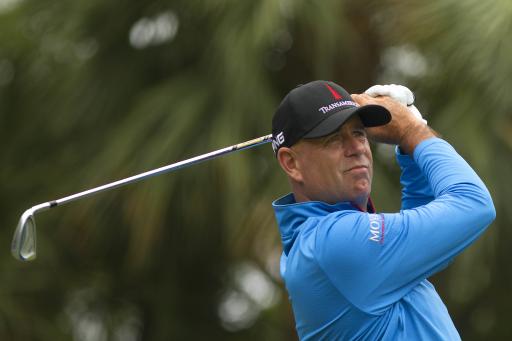 Stewart Cink fired a second consecutive round of 8-under-par 63 to open up a commanding five-shot lead at the RBC Heritage.

Cink, 47, eagled the par-5 2nd hole to make a great start to his day and he followed this up with birdies at the 3rd and 6th holes on the front nine.

The 2009 Open champion made four birdies on the back nine to finish on 16-under-par, which is a record-low 36-hole score at the RBC Heritage.

Cink won the tournament in 2000 and 2004 and he could become only the third player in PGA Tour history to win at Harbour Town Golf Links at least three times.

Corey Conners shot a superb 64 in the second round, taking only 30 shots to play the front nine, to set a clubhouse lead on 11-under-par. The Canadian came tied 8th at The Masters last week and he has followed up that performance at Harbour Town Golf Links.

At this tournament last year, Conners was 11-under-par after two rounds and he achieved that mark again here to sit in second place, in pursuit of the second PGA Tour title of his career.

Emiliano Grillo made a significant move on Friday to 10-under-par. The Argentine made five birdies on the front nine and also birdied his final two holes to shoot a 7-under-par 64 to finish in 3rd position.

Having shot a 62 in the first round, Cameron Smith was in prime position on Friday but the Australian could only shoot a level-par 71 to fall seven shots short of Cink.

Much like Conners, Smith finished in the top 10 at Augusta National but the World No.26 made three bogeys in his second round and remained on 9-under-par for the tournament.

USPGA champion Collin Morikawa built on his first-day score of 6-under-par, shooting 68 on Friday to finish on the same score as Smith.

NEXT PAGE: GOLF FANS REACT AS CALLUM SHINKWIN AND HIS CADDY FIGHT AT THE AUSTRIAN OPEN!