Tiger Woods' giant short-game facility looks set for a serious upgrade... does it signal a return to golf for the 15-time major champion or is it being revamped for his son Charlie? 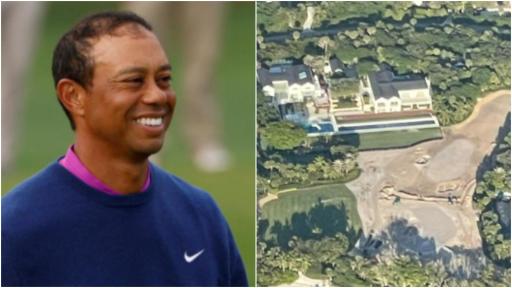 Tiger Woods is getting his course design team to renovate his giant short-game facility at his luxury $40 million Florida mansion.

An image surfaced on Twitter today showing work being done on three of the four greens at Woods' huge Jupiter Island Practice Facility.

Woods, 45, is currently at home recovering from injuries sustained during a horror car crash in Los Angeles back in late February.

The image has certainly got a number of golf fans talking. Some are hoping it means Woods is planning a speedy recovery to return to practice and work on his short game, while others are more in the camp that the revamped facility will be mostly used by his son Charlie, who hit the headlines when excelling alongside his father in a televised father-son tournament at the end of 2020.

Tiger Woods's Design website writes about the facility: "Tiger Woods had long hoped to have a practice facility to hone his short and mid-range games. When he moved to Jupiter Island in 2010, he decided to make this dream a reality. He designed and built a complex with one goal in mind: replicating tournament-like conditions, similar to those he faced around the world.

"Tiger started with a flat, 3.5-acre area, and, teaming with TGR Design, directed its design, layout, and shaping. The result is a practice facility of tournament-conditioned turf and bunkering that recreates the look, feel, and playability of various major courses. Using a variety of turf found on the PGA TOUR, the design allows Tiger to hit almost any shot of 150 yards or less to one of four unique greens."

NEXT PAGE: HOW MUCH IS TIGER WOODS REALLY WORTH IN 2021?