Thomas Bjorn reacts to Golf Digest's social post about "most wins the past 12 months". 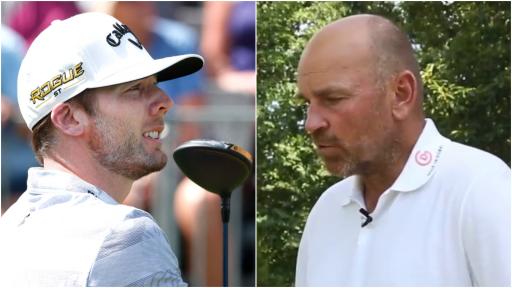 Former European Ryder Cup captain Thomas Bjorn has hit out at Golf Digest's latest social graphic about "most wins the past 12 months".

The post is clearly referring to just the PGA Tour as it just features Sam Burns, Patrick Cantlay, Hideki Matsuyama and Cameron Smith, but that infuriated Bjorn because the caption says "the only players to win three times in the last year."

Burns, Cantlay, Matsuyama and Cantlay have all clinched a hat-trick of wins the past 12 months, with Burns the last to achieve that feat following his title defence at the Valspar Championship in a playoff over Davis Riley on Sunday.

Bjorn tweeted in response to the post: "Golf is only played in America and not by women."

Golf is only played in America and not by women https://t.co/Lsu2LWwwSg

Bjorn was not particularly happy with Golf Digest's approach to the subject of "most wins the past 12 months", especially given his fellow Scandinavian Viktor Hovland has trumped them all in the men's game with four victories during that time frame.

The only difference is that two of those victories came on the DP World Tour at the 2021 BMW International Open last summer and the 2022 Dubai Desert Classic in February.

Hovland also defended his Mayakoba Classic title on the PGA Tour in November last year before going on to win Tiger Woods' Hero World Challenge in his next start.

World number 1 Jin Young Ko has had some UNBELIEVABLE form over the last 6 months.

6 wins in her last 10 starts! pic.twitter.com/TxlIXjYPOE

Bjorn also makes a point about the LPGA Tour, too, given the most in-form golfer on the planet is Jin Young Ko with six victories in her last 10 starts.

Probably, but then they should put that!!!
It’s a golf magazine and even if they don’t respect any other men’s tour they should respect women’s golf..

Incredible how little notice is made of Jin Young Ko!
Compared to mens golf.