It was the Woods show at Ritz-Carlton Golf Club on Friday as they took part in the PNC Championship Pro-Am. 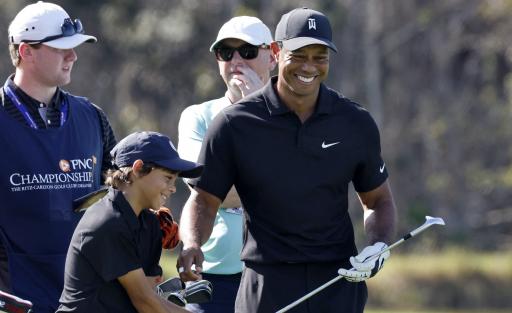 Tiger Woods and his son Charlie were the talk of the town on Friday in Orlando as they competed in the second Pro-Am of the week at the PNC Championship.

Playing alongside Matt Kuchar and his son Cameron, Woods rolled back the years with some delightful shots, while Charlie also produced some magic of his own too.

The 15-time major champion admitted to being slightly nervous on the first tee as the crowds approached and the wind got up. His driver is a club he can't quite commit full force to.

On the 2nd hole in Florida, Woods played a pin-point approach to the green which finished three feet away from the pin. On the 6th hole, Charlie essentially reproduced this shot with fantastic wedge play.

RELATED: TIGER WOODS IS USING A NEW TAYLORMADE DRIVER AT THE PNC CHAMPIONSHIP

Charlie Woods with a beauty to an INCH. pic.twitter.com/NGL0ByIx5f

As the round progressed, Woods' 12-year-old son grew in confidence. He holed a putt of roughly 20 feet across one of the large greens at Ritz-Carlton Golf Club.

He received a round of applause but only a fistbump from his dad. The 45-year-old's expectations are clearly very high. They were both dressed head to toe in black, so we can't wait to see them in red over the weekend.

At the 11th hole, Charlie almost holed out from the middle of the fairway. He sent his second shot floating on to the green and it perfectly spun back to about half an inch from dropping in the hole.

One of the highlights of the round came when Charlie striped a drive from the tee and a fan shouted: "Good job Charlie!" He replied with a simple "Thank you." I think he will be answering many more calls like this as his career progresses.

After the round, Woods looked physically exhausted as he sat back and watched Charlie hit more balls on the driving range. He admitted that he wouldn't have been able to walk for 18 holes.

"I couldn't walk this golf course even right now, and it's flat. I don't have the endurance. My leg is not quite right yet and it's going to take time. I told you in the Bahamas, I'm a long way, way from playing tournament golf," said Woods.

"This is hit, hop in a cart and move about my business just like I would at Medalist. Being able to play tournament golf and being able to recover, practice and train and hit balls after a round and do all of the things that I need to be at a high level, I'm a long way away from that."

The 82-time PGA Tour winner ruled out the prospect of using a cart on the tour. However, despite the reality of his injuries coming to the surface, it was refreshing to see the Woods duo play together again.