After Tiger Woods and his son Charlie played in the Friday Pro-Am at the PNC Championship, they went and met Lee Trevino on the driving range. 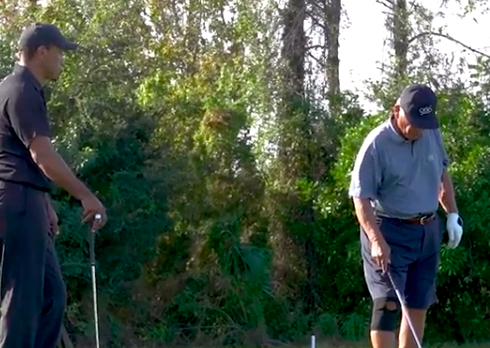 Tiger Woods and fellow golf legend Lee Trevino produced a masterclass in wedge play after the Friday Pro-Am at the PNC Championship.

The Woods duo played in the event with Matt Kuchar and his son Cameron, but they went to the range afterwards to meet the six-time major champion Trevino.

The Merry Mex was on his usual flamboyant and outgoing form and he talked to Woods' 12-year-old son Charlie about different aspects of the game.

"Charlie, if you go to England, you can keep it low and run it forever!" This particular comment made Woods laugh, as Trevino described how to play at British links courses.

The 82-year-old is more than qualified to teach people how to play on hard and fast courses. He won The Open Championship in 1971 and 1972.

As the video above develops, Trevino moves on to wedge play and he explained his technique on how to hit short wedge shots. He and Woods compared notes.

"Hey Charlie, you've got to practise this. I know your dad can do this," was Trevino's opening line.

"The most fear ever on a par-5 is a 50-yard shot, with the pin on the right with water right there. I said the greatest way of doing this to avoid the water is to play with your hands forward.

That way you can't shove them in it. Watch it though, you put your hands there and then you hold it. See you're never going to go to the right."

Woods and Trevino compared each other's techniques when hitting wedge shots and it was fascinating to hear that they have different ways of executing a pitch.

It is fantastic to see two icons of the sport from different generations interact in this way. This is one of the perks of this event as it mixes a number of great champions and their families.

Gary Player, Nick Price, Sir Nick Faldo and Tom Watson are also in the field this week in Orlando, as well as a host of other major champions and their loved ones.

Trevino won 29 times on the PGA Tour and he picked up 92 professional wins in total. He is playing at the PNC Championship with his son Daniel.

NEXT PAGE: THE BEST CHRISTMAS STOCKING FILLERS FROM SCOTTSDALE GOLF!