All eyes were on Tiger Woods and his son Charlie when they finished second at the PNC Championship in December, but will he become a PGA Tour golfer? 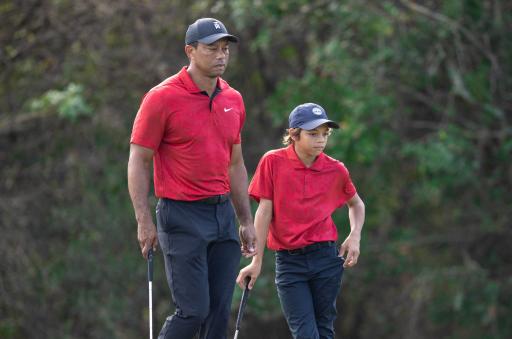 Tiger Woods and his ex-wife Elin Nordegren have reportedly conflicting ideas over their son Charlie's future, following his well-publicised appearance at the PNC Championship.

The Woods duo played fantastically in the pairs format at the Ritz-Carlton Golf Club in December, finishing second to John Daly and his son John II.

RELATED: WILL TIGER WOODS RETIRE FROM GOLF AT THE 150TH OPEN CHAMPIONSHIP AT ST ANDREWS IN JULY?

Charlie was the talk of Orlando and his superb golf made headlines and highlight reels, as well as his mannerisms which almost perfectly mirrored his father from his PGA Tour career.

However, according to an insider from OK! Magazine, Woods and Nordegren have disagreed over what the future holds for Charlie who is 12 years old.

"Tiger thinks it would be great for Charlie to have a destiny like his. Tiger isn't trying to be pushy, he's just proud of his son and sees a lot of potential in him," an insider told OK! Magazine.

"Elin worries he's going to suffocate Charlie. She reasons it's hard enough to be a kid these days without this as added pressure.

"She concedes that it boils down to what Charlie wants."

It is unclear as to what source has provided this information, but what we do know is that Charlie shares the same passion for golf as his father.

At the PNC Championship, the 15-time major champion took great pride in playing alongside his son in a "hit and giggle" event.

For now, we don't know when Woods will be back on the PGA Tour. In his return to public life in December, he confirmed that he was no longer capable of a full schedule.

If there is a rift between Woods and Nordegren, I'm sure every golf fan hopes that it can be resolved as Charlie could be a star in the making.

NEXT PAGE: THE BEST GOLF GLOVES TO BUY FROM SCOTTSDALE GOLF IN 2022