Jon Rahm was on a birdie train with Cam Smith this week while Bryson DeChambeau discussed how his pursuit for speed and distance went to extraordinary lengths on the PGA Tour. 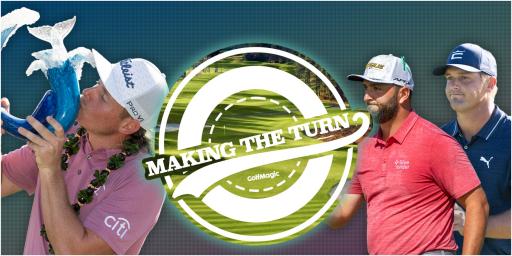 Jon Rahm and Cam Smith headline the golf coverage this week on Making The Turn.

This is where we detail everything that you might have missed in the golf world over the past week.

And what a busy week it has been with the return of PGA Tour golf after the Christmas break.

We saw Cameron Smith break a new PGA Tour low scoring record on his way to winning the Sentry Tournament of Champions.

Elsewhere, we saw some equipment drops from all the big manufacturers.

Bryson DeChambeau, Collin Morikawa and Viktor Hovland all made headlines this week.

As did Tiger. Always Tiger.

Welcome to the carbon wood era at TaylorMade

TaylorMade launched their new Stealth line of drivers which we saw Tiger Woods debut in December.

Last week staffers such as Colln Morikawa put it into play and hit some savage bombs.

Morikawa, 24, has already increased his ball speed and swing speed with the eye-catching piece of equipment.

Here's five reasons why it is no gimmick.

And our review with equipment editor Alex Lodge.

Callaway Golf also had a huge equipment drop, with their line of Rogue drivers.

Justin Thomas started poorly at the Sentry Tournament of Champions, but then did something special.

He managed to improve his score by six shots in his first three rounds and still it wasn't good enough to get close to the lead.

JT shot a course record of 61 at the Plantation Course but then it was later equaled by Jon Rahm.

Thomas, 28, also took the time to tell us about the time he beat a record held by Tiger Woods when he was nine years old.

A bold claim from the greatest of all time?

Jack Nicklaus said he believes if Tiger Woods was to win a major again it would eclipse his achievements.

Woods is in rehab and it's unlikely we'll see him play again for a few months, if at all until the end of the year.

Nicklaus also took the time to tell us that he was still puzzled about his first ever PGA Tour cheque he received for $33.33.

Viktor Hovland arrived in Hawaii without his clubs.

When they turned up, they were snapped.

The Norwegian also displayed some serious optimism when he got stuck in the long grass in Kapalua.

Daniel Berger also had his own issues with golf clubs this week.

Steve Stricker was seriously unwell after the Ryder Cup

Captain Strick, as he was affectionately known by his young Ryder Cuppers, disappeared from public attention after Whistling Straits.

He revealed a mystery illness put him in the hospital where he could have died.

Players on the PGA Tour were without green-reading books in Kapalua.

Instead, they were given tour-approved yardage books.

He will play the PXG GEN4 driver.

New hat Bryson discusses how he concussed himself

Bryson DeChambeau went to extraordinary lengths, it seems, in his pursuit for speed and distance.

He decided wear a more traditional piece of head wear this week.

DeChambeau even ripped one drive with a ball speed of 199mph.

But Aussie Smith held on and won the Sentry Tournament of Champions by one stroke.

He set a new, low-scoring record for the PGA Tour.

Still, life is alright for Rambo: