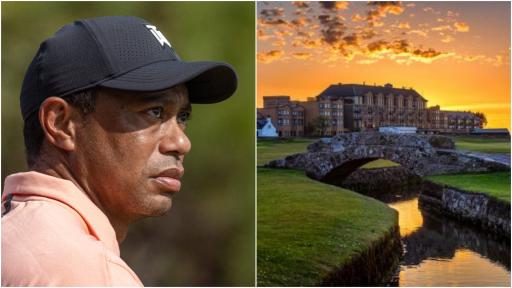 Sky Sports Golf coach and presenter Simon Holmes believes we could very well see Tiger Woods retire from golf at the 150th Open Championship on the Old Course at St Andrews this July.

Woods, 46, pleasingly returned to competition for the first time since his horror car crash in February when playing alongside his 12-year-old son Charlie Woods in the 36-hole PNC Championship two weeks before the end of 2021.

But despite signs of optimism for Woods fans several weeks ago, Holmes believes the former World No.1 could decide to call time on his career at the Home of Golf, just as record 18-time major champion Jack Nicklaus did at the 2005 Open Championship.

Lead Sky Sports Golf presenter Robert Lee gave his views on what he considered would be the "big golf moment of 2022" and he said that he thinks Woods will actually win a PGA Tour event in what would be the comeback of all comebacks.

Woods just needs one more victory on the PGA Tour to move into the outright lead as he is currently tied with Sam Snead on 82 wins.

Holmes, on the other hand, was thinking much differently and admitted he could see Woods bowing out of golf like other legends of the game have done in the past on the famous Swilcan Bridge at 18.

"I really hope it doesn't happen but it's something I think that could happen," said Holmes during the live Sky Sports Golf broadcast of the Tournament of Champions on Sunday evening.

"Jack and Arnie did the same thing on the Swilcan Bridge when they played in their last major, and I could just see Tiger thinking it would be a nice way to go out."

Holmes has worked with a number of game's best players in the past, including Sir Nick Faldo, Ernie Els and Seve Ballesteros.

RELATED: TIGER WOODS ADMITS HE WOULD LOVE TO PLAY AT THE OPEN IN 2022

Prior to the PNC Championship in December, Woods made it no secret of his love of St Andrews and just how hard he will be fighting to make it to the Old Course in July.

The Open Championship will take place at St Andrews from July 14 to 17.