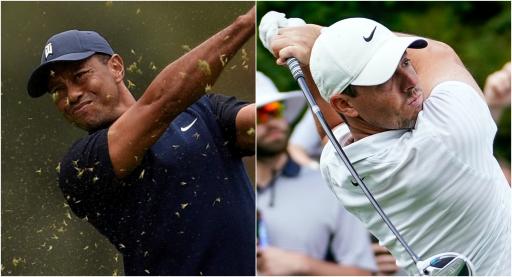 Tiger Woods and Rory McIlroy took part in a great driving contest arranged by TaylorMade, alongside some of the PGA Tour's best players and upcoming stars.

Each player took aim down the driving range and we saw some incredibly impressive and accurate drives from them, including Woods who carried his first drive 313 yards.

Not only was it great to see each player take part and join in with the camaraderie, but it was also great to hear the conversations that were going on while the drives were being hit.

The 15-time major champion revealed to the Englishman Fleetwood that two-time major winner John Daly was the first player to average over 300 yards on the PGA Tour.

Woods also revealed that in 1997, when he won his first major title at The Masters, he averaged just under 300 yards off the tee. Soon after, Woods would go on to set the standard with his driving numbers.

As the players took their hits down the range, Johnson was eager to win the contest and he showed this by taking large and looming practice swings to get ready for his turn.

His preparation paid off as after he hooked his first drive left, he smoked one 346 yards down the range with his next shot, particularly to Wolff's amazement.

There were some outstanding drives from each player and it is always a pleasure to watch some of the best players in the world tee it up together like this.