Lucas Glover came from four shots behind at the start of round four to claim his fourth PGA Tour win. 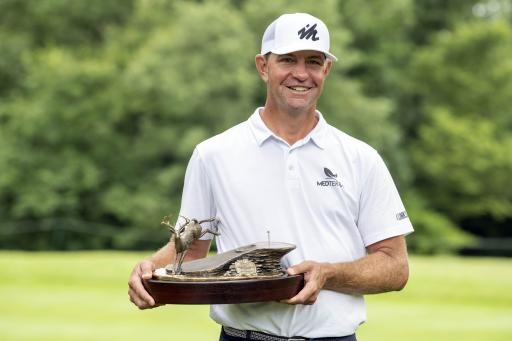 Former US Open champion Lucas Glover has won his first PGA Tour title in 10 years with a two-shot victory at the John Deere Classic.

Glover holed a clutch par putt on the 18th hole at TPC Deere Run to set a clubhouse lead of 19-under-par, which proved to be insurmountable.

The 41-year-old claims his first victory on tour since he won the Wells Fargo Championship in 2011, which also adds to his win at the US Open in 2009.

"I always thought I could do this again," he said.

It's been 10 years since @Lucas_Glover_ won on TOUR.

He's in the clubhouse with a 3-shot lead @JDClassic. pic.twitter.com/vZQ94x7yfd

"I just needed to figure out the best way to go about it again. I've always worked hard and believed in it, but made some changes two or three years ago that (I) needed to do for more longevity.

"I want to play a few more years and try to keep going. It was just getting back refocused."

Glover began the day four shots behind leader Sebastian Munoz on 12-under-par and he made a solid start on Sunday with birdies at the first two holes.

Although he gave a shot back to the course on the 11th hole, Glover made four consecutive birdies from hole 12 to hole 15. He added one more on the 17th hole to post a fantastic round of 7-under-par and a score of 19-under-par in the clubhouse.

Former US Ryder Cup player Ryan Moore was one of the players digging deep to try and match Glover, but he could only manage a score of three-under-par on Sunday to finish two shots back.

The last chance of a playoff fell to Kevin Na. He rolled in a birdie putt on the 17th hole, meaning that he needed to eagle the par-4 18th hole to take the tournament to extra holes.

The 37-year-old could only manage a par, which meant that Glover had finally ended his 10-year wait for his fourth win on the PGA Tour.