Sebastian Munoz is looking for his second win on the PGA Tour at TPC Deere Run on Sunday. 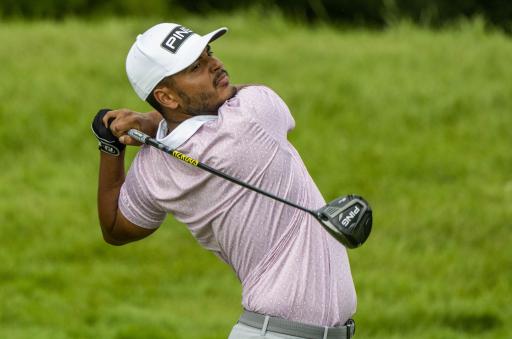 Sebastian Munoz raced into the lead at the John Deere Classic, finishing on 16-under-par for the tournament and one shot ahead of Brandon Hagy.

Munoz, who began the day just one shot behind Luke List after two rounds, made a fairly slow start to his third round with two birdies and two bogeys on his first nine.

But with birdies on the 11th, 13th and 16th holes, the Colombian finished with his second consecutive round of 67, 4-under-par, to finish with a one-shot lead on 16-under-par.

The 28-year-old secured his first PGA Tour win at the Sanderson Farms Championship in 2019, beating the impressive Sungjae Im in an exciting playoff.

After a scintillating run in his first nine holes, Cameron Champ fired himself into contention with a superb 6-under-par 65 on day three at TPC Deere Run.

Champ, who began the day five shots behind List on 8-under-par, birdied five out of his opening six holes to race into contention. He added another birdie at the par-4 14th hole to finish on 14-under-par, just two shots behind Munoz.

The big-hitting American has either missed the cut or withdrawn in each of his last five PGA Tour events, but he now has a great chance to build on his two career wins on tour.

Three-time tournament winner and 2021 US Ryder Cup captain Steve Stricker will need a very low round on Sunday if he is to pick up his fourth win at the event.

The 54-year-old shot a 68 on Saturday to finish on 9-under-par for the week, seven shots behind Munoz.

NEXT PAGE: GOLF FANS REACT AS AIRBORNE BALL IS STRUCK BY LIGHTNING AT TOPGOLF IN AMERICA!