Kevin Na on walking in his putts on the PGA Tour: "Nobody thought it was cool until Tiger Woods imitated me" 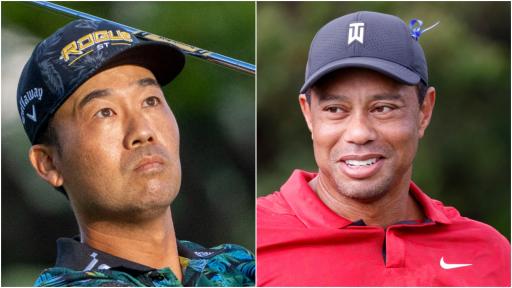 PGA Tour pro Kevin Na admits his walk-in putting craze has only become a thing ever since Tiger Woods copied him at The Players Championship at TPC Sawgrass in 2019.

"I've always done it," said Na, who disappointingly finished tied 20th at the Sony Open last week having led after day one with a 61.

"Nobody thought it was cool until, you know, the Big Cat imitated me."

He added: "I wish I had walked a few more in coming down the stretch [at the Sony Open]."

Na was referencing to the time when the pair played together in the third round of the flagship PGA Tour event in Ponte Vondra Beach.

As he rolled his four-footer towards the cup on the iconic par-3 17th, Na already had his hand over the hole waiting to pick out his ball.

Woods then laughed about it as he prepared to tap home his own attempt from three feet, and the former World No.1 then imitated Na by doing exactly the same thing.

Na and Woods walked off the green together chortling with smiles on their faces, much to the delight of golf fans and commentators alike.

WATCH THE MAGIC MOMENT BELOW

After the round that week, Woods told reporters: "It looked like he was going to catch it before it got to the hole. He had to pull his hand back, slow it down.

"I thought I'd have a little fun with it, but I had to make sure I hit it on line first."

NEXT PAGE: PAIGE SPIRANAC IS DOING EXACTLY THE SAME THING AS TIGER WOODS IN 2022