Hideki Matsuyama claimed his eighth win on the PGA Tour and Kevin Na's unexpected dispute with Grayson Murray went viral. But what else happened in golf this week? 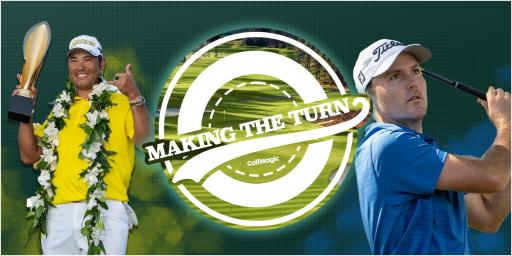 Hideki Matsuyama leads the coverage of Making The Turn this week, after his outrageous 3-wood led to his eighth PGA Tour victory.

If you aren't aware, Making The Turn is a chance for you to catch up on the week's golf coverage.

It has been another interesting seven days and now things are slowly starting to ramp back up again the golf world.

Oh, and the revamped DP World Tour arrives back onto our screens this week with the Abu Dhabi HSBC Championship.

Plenty of golf. Perhaps too much golf? No, definitely not.

Let's dive in to what you may have missed.

Kevin Na famously walks in his putts. But it all went a bit wrong at the Tournament of Champions.

He later said it was only after Tiger Woods imitated him at the Players did it become cool.

Na also decided to get into an exchange with Grayson Murray over pace of play.

Well, it's only 17 days into January and we absolutely did not have this on our bingo card.

Perhaps a new rivalry has emerged.

One thing is for sure, this beef feels more authentic than Brooks Koepka's exchanges with Bryson DeChambeau late last year.

Nicolas Colsaerts told the world he is currently in hospital with a rare kidney disease.

He wrote in detail on Instagram how he is suffering with primary membranous nephropathy.

The 39-year-old memorably was part of Europe's 2012 Ryder Cup team at Medinah.

Netflix and the game's governing bodies have announced a behind-the-scenes special.

The game's biggest players will allow cameras to track their progess this year.

Fans will get a glimpse of real (we think?) tour life as they make their way through the season at every major and the Players.

The season-ending Tour Championship at East Lake will also feature as part of the coverage.

Callaway Golf made a not-so-subtle dig towards TaylorMade.

We at GolfMagic saw the funny side of it.

Martin Kaymer welcomes the birth of his first child

Congratulations to German Martin Kaymer, the former world number one, who welcomed the birth of his baby boy Sam.

Kaymer, 37, has revealed plans to live in Florida, too.

Unfortunately, he missed the cut. But Geno Bonnalie's running commentary was hilarious to follow.

FootJoy launched their new shoes ready for the summer: FUEL.

Find out about prices and designs here.

The world long drive champion played in his first professional tournament in more than six years.

Berkshire said on Instagram he has been planning this for a while.

We look forward to seeing how he gets on.

Rory Sabbatini's tattoo perplexes us all

Sabbatini turned up at the Sony Open with a new tattoo on his right arm.

The only problem was that it had a spelling mistake.

He also confused us by having some blue tape across his hat, covering up his sponsor.

Players and caddies were wearing green ribbons on the PGA Tour. This is why https://t.co/zoLuZI43hf

The golf world was in mourning after the death of respected golf journalist Tim Rosaforte.

Hundreds upon hudreds of tributes have been paid by the game's biggest stars.

As a mark of respect, players wore green ribbons on their hats to say goodbye.

A familiar face emerges in Hawaii

Haotong Li has been struggling for a long time. But it was good to see him return to some form at the Sony Open.

Unfortunately, he couldn't consolidate on his good start and make a true run for the win on Sunday.

A frustrating 73 on Saturday saw him tumble out of contention.

But nontheless, he is a player we know who can shine very brightly.

What a win. What a comeback. What an exhilirating finish.

We could just watch this on repeat.

Russell Henley has just got to sit back and applaud. He didn't lose this. Hideki won it.