Tiger Woods is expected to hold a press conference and also hit balls on the range at this week's Hero World Challenge at Albany. 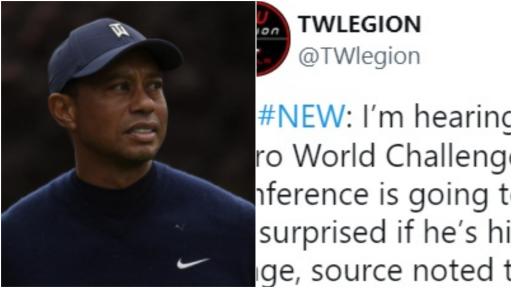 Tiger Woods will hold a press conference on Tuesday afternoon ahead of this week's Hero World Challenge at Albany.

The popular TWLegion account, which is typically the first to break the latest Woods headlines in the game and now has more than 35,000 followers, was the first to announce the news on Monday evening.

The PGA Tour then followed up to officially confirm the news.

Woods, 45, is the tournament host of this week's tournament in the Bahamas and it is anticipated the 15-time major champion will be on hand to welcome some of the game's best PGA Tour players.

The former World No.1 is also going to present the tournament like normal and he is likely going to be hitting balls at the back end of the range during the practice days, much to the delight of Woods fans around the world.

Woods has been recovering from leg injuries sustained during his horror car accident in Los Angeles back in February.

Earlier this month, Woods was seen hitting balls on camera for the first time since the car crash.

#NEW: I’m hearing that TW is going to be hosting the Hero World Challenge in person and that a press conference is going to happen tomorrow. Also told to not be surprised if he’s hitting balls on the back end of the range, source noted that he doesn’t wanna take away from event

Tiger is set to speak to the media for the first time since the accident, and will be hosting his tournament in person, also his first official public appearance. It comes just a week after he posted a swing video, prompting speculation of a comeback. pic.twitter.com/VIWSaK1nmJ

It was time for him to talk and he’s going to at long last. With regard to his golf game, I wouldn’t be surprised if it’s just along the lines of continuing to progress. Have to look at how he’s done these things before.

"Trust me TW will only add to the event," replied a Woods fan. "Get in some practice before Thursday and then let the golf take over. The top players welcome his presence."

"Cannot wait to see Tiger back, really hope this is true," said another.

One golf fan commented: "I don’t care if he’s hitting a wadded up tournament guide into an overflowing trash can, I’ll watch that for 6 hours straight."

There was already strong rumour Woods was going to be making an appearance this week after his yacht was spotted mooring in Albany.

The Hero World Challenge will see 20 of the game's best players tee it up for the Tiger's famous trophy.

Tournament favourite Rory McIlroy is certainly hoping the rumour of a Woods appearance is true.

"From what we've seen in short video clips, he's back to hitting golf balls which is great news and while he's not teeing it up in the Bahamas, it would be great if he was present as I'm sure it would be a big lift for not only Tiger but all golf fans," said McIlroy.

McIlroy headlines the betting, narrowly ahead of in-form Collin Morikawa.

NEXT PAGE: ALL YOU NEED TO KNOW ABOUT THE HERO WORLD CHALLENGE