Tiger Woods made a bold claim in the commentary booth, JT found a gap as Joaquin Niemann leads after 54 holes at the Genesis Invitational. 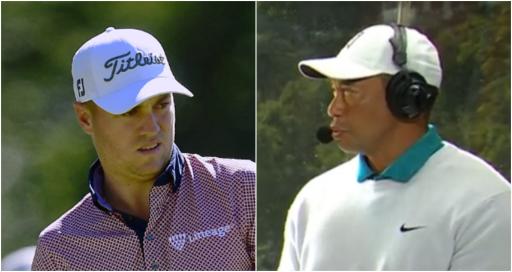 Tiger Woods says he still feels like he can "kick these guys' butts" as he hopped into the commentary booth at the Genesis Invitational.

As tournament host Woods, 46, joined Jim Nantz for a short stint to call the action and made a bold claim to suggest his career isn't over.

Woods explained how the fire is still burning, how Justin Thomas is like a little brother to him and how he can "still send it".

By day's end, Joaquin Niemann had extended his lead to three after shooting 68 to go along with a pair of sublime 63s on Thursday and Friday.

He is being chased by the surprise contender Cameron Young and the Norwegian superstar Viktor Hovland at par-71 Riviera.

Niemann should really get this done on Sunday. In truth, even Hovland appears to be too far behind to claim the win.

If here were to win, it would see him earn his second PGA Tour victory and he's only 23 years old.

In the latter part of the broadcast, Woods hopped in the booth and was pressed again by Nantz about the date of his return.

"I don't know," came the response from the cat, who also confirmed that his upcoming hall of fame speech will be nerve wracking.

"I still feel like I can be out here to kick these guys' butts," he joked before explaining his close relationship with "little brother" Thomas.

Woods paid tribute to the bigger hitters on the tour at present but added: "I can still hit it out there".

Though he admits his playing days at an elite level are numbered and explained after he retires he wants to design more courses.

Woods also paid tribute to Nantz' call when he won the 2019 Masters. The return to glory, Nantz said.

"That was special and your call made it that much more memorable and historic," said Woods.

“You will see me on the PGA TOUR, I just don’t know when.” @TigerWoods joins Jim Nantz and @nickfaldo006 to discuss his rehab and return to golf. pic.twitter.com/tKzhH8pnJ5

Related: Harry Higgs could be fined for shirtless celebration

Next page: Time for the PGA Tour to ditch Phil Mickelson?