Phil Mickelson: It's time for the PGA Tour to ditch Lefty forever | Opinion

Phil Mickelson has torched his reputation by saying the quiet part loud. It's time the PGA Tour turned their back on him forever. 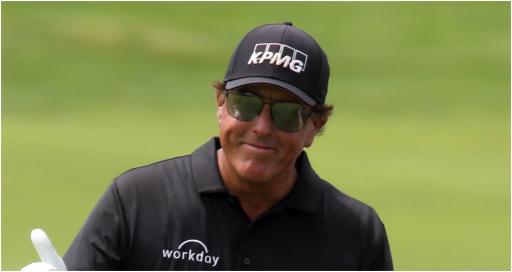 Phil Mickelson once described himself as a smart aleck when asked why he does his own social media.

Translated, that term is used to define someone who behaves as if they know everything. And yet Mickelson behaved with considerable ineptitude when he spoke to the journalist Alan Shipnuck.

More: PGA Tour pros label Mickelson "toxic" and call for him to be suspended

If you haven’t already read what he said by now, I’ll jog your memory. Essentially, his comments suggest he knows his cosying up to the Saudis means he is complicit in sportswashing.

“Scary motherf***ers”, Mickelson said of Mohammad bin Salman and his associates. “We know they killed Khashoggi”, he added. Quite why he would say something like this on the record is beyond me.

PIPhil, you just said the quiet part loud! Did you not learn anything whilst you were out there in Jeddah, in King Abdullah Economic City, playing a tournament that means absolutely nothing to anyone?

You're not supposed to say that! That will be 100 lashes.

When I read those comments, I thought they were a joke. Beyond extraordinary. Beyond parody. Surely this is one of those articles where in the fine print it says this is tongue-in-cheek?

A day in the life of Phil Mickelson: I wake up, stretch my legs. Go out and admire my private jet and quickly drop Greg Norman a line and complain about how the PGA Tour just don’t get it. The fools!

Then I drink some COFFEE FOR WELLNESS, head out to the range to hit some bombs and hellacious seeds. I’m coming for you @brysondechambeau. Don’t make me roast you, Chuck!

To draw a parallel here, this evoked exactly the same astonishment in me when I heard the famous Bob Woodward taped interview with Donald Trump in the September of 2020.

In that bombshell audio, Woodward informs Trump he is recording their conversation. Then, The Donald just comes out and says he knew COVID-19 was serious, and not a hoax.

It was completely at odds with what he was saying publicly.

More: Jon Rahm will only discuss PGA Tour loyalty once

But back to Mickelson.

Apparently not a parody, then. Mickelson has spent the better part of three decades carefully cultivating his image as one of the good guys.

Good ol’ Lefty. Isn’t he hilarious on social media? What a win at Kiawah. Surely he should be in the commentary booth! He’s so much more engaging.

And in one fell swoop, he appears to have torched his reputation beyond all recovery. There was one thing in his comments that really stuck out like a sore thumb.

It wasn’t the yes they killed Khashoggi and yes they are a brutally repressive regime who murder gay people with an absolutely dreadful history of human rights abuses, but…

It was the fact that Mickelson confirmed he had hired attorneys to set-up the stipulations for the players for the proposed NOT SO super league (hat tip to Rory McIlroy here, great dad joke).

This is not just Mickelson simply pretending to be interested in the SGL to strong arm the PGA Tour into handing him more cash. Never mind him doing exactly the same thing he is accusing the PGA Tour of doing.

This is him organising the damn thing. Baffling, in my mind.

More: Will the SGL kick off during the week of the Players?

To truly understand Mickelson’s gripes, you have to be as greedy as he appears to be. There are probably some legitimate issues that he has in terms of not being able to own all of his media rights.

Of course, there is an element where a player must sit there and think I hit this shot, I created this memory, so surely I should be the one to benefit financially? True, to an extent.

But there has to be give and take. Mickelson cannot sit there and believe that he wouldn’t have been able to earn so much without the PGA Tour or Tiger Woods’ move-the-needle influence in the modern era.

I am not sitting here suggesting the PGA Tour - a multibillion-dollar company - is perfect. They don’t get everything right. There is greed there, too. Parts of the tour have been stale.

It needs shaking up. It has been shaken up. Things will change.

But the PGA Tour finds sponsors and negotiates TV deals. There is the staggering amount of money available in the FedEx Cup. There are player pensions. A seniors tour. They promote charities.

What exactly would this SGL have? Would they allow Mickelson to own all – or a higher percentage – of his media rights? Surely any rival tour would set-up their financial structure in a similar way?

If Mickelson had his way, then their structure would make absolutely zero sense. Which essentially proves – in my mind  –  that Norman is not interested in “growing the game in a global scale”.

Mickelson’s comments would sit better had he not been sitting on what is believed to be a monumental amount of cash – the same he accuses the PGA Tour of currently hoarding.

That figure is $800million, if reports are to be believed. Yes, the person who claimed the PGA Tour’s greed was “beyond obnoxious” is currently feeling like he’s owed some.

So where now, for Mickelson? Surely his comments are beyond recovery. Lefty was given a mulligan after he was named in a civil case in an insider trading scam in 2014.

If you don’t recall that. Mickelson bought stock between July and August 2012 – according to records – in Dean Foods for $2.46million. A day later, the stock price went soaring.

Mickelson ended up selling all of his holdings in Dean Foods for a profit of nearly $1million. His friend, Billy Walters, had transactions that were similar. Walters was subsequently convicted and jailed.

Mickelson was named as a relief defendant and never charged with a criminal offence, yet the authorities believed he was the beneficiary of insider trading, even if he didn’t engage with it.

This was all in the same year he won approximately $46million, according to Golf Digest. That is pretty extraordinary stuff.

More: The truth about the SGL, according to Rory McIlroy

Which leads us to now. Where does Mickelson go from here? Is there a road back? Can he command any respect, sympathy or understanding from any of his peers?

Not in my mind.

Perhaps Mickelson could have been better served trying to rally the players into his way of thinking.

Maybe he did and they just didn't care?

The memories that he has created have been extraordinary. That shot from the pine straw at Augusta National elevated him to legendary status if he hadn’t reached it already.

Now, the legends of the game must look at him and shake their heads.

When Mickelson previously committed to the Saudi International in December 2019, he wrote that he understood people would feel upset or disappointed, but added: “You’ll be okay”.

Thank you for the memories, Phil. But don’t let the door hit you on the way out.

Whatever you choose to do from here you should have enough money to see you through to retirement. I understand you may feel upset or disappointed at the op-eds written about you.

But you’ll be okay.

Next page: Phil Mickelson says this is all about leverage