Scott Parel is competing yet again at the top of the PGA Tour Champions leaderboard but earning millions in golf didn't use to be his focus. 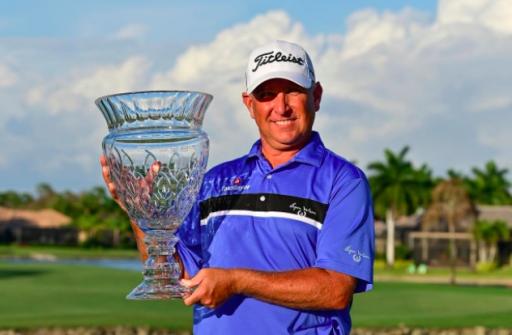 The majority of golfers on the PGA Tour went through a thorough and brutal college golf system and worked their way through the ranks to reach the world's premier golf circuit.

College golf in America is often where professional golfers are discovered and where the world's best amateurs grow and rise to stardom.

Scott Parel did not go through the college golf system. At one stage, Scott Parel wasn't even a golfer and his focus was not on a successful PGA Tour Champions career.

He studied computer science at the University of Georgia. For 10 years, Parel worked as a computer programmer and a database administrator, jobs from which you wouldn't expect someone to make the leap to professional golf.

He turned professional in 1996 at the late age of 31 and for a long time, the 56-year-old ground on mini-tours and development tours. He made his first appearance on the Korn Ferry Tour at the Nike South Florida Open in 1998.

RELATED: HARRY HIGGS: I KNOW I SHOULDN'T LIFT UP MY SHIRT ON NATIONAL TELEVISION

It has been an amazing journey for Parel and now 24 years later, he has earned almost $5 million on the PGA Tour Champions and has made fleeting appearances on the PGA Tour.

The man from Michigan played at the US Open in 2002 and 2005, a world away from his office desk working with computers for sure.

He is a three-time winner on the PGA Tour Champions and he has an opportunity to win for the fourth time at the Chubb Classic this week, the event he won last season.

With 18 holes remaining, Parel is two shots behind the timeless Bernhard Langer with Retief Goosen and Jerry Kelly also in contention.

"I love it. He's unbelievable (Langer). I saw him yesterday, I'm like, I'm glad you're shooting your age and not my age because then we would have no chance," Parel said after the second round on Saturday.

"I like playing with Bernhard. Obviously, he's a special golfer and a better person than he is a golfer. So, yeah, I'm looking forward to having a chance. I don't know if I'll be with him or not, but I'm somewhere in the mix."

With over $13 million in total earnings in his professional career, Parel has earned the right to compete with Langer and the likes. His story is an amazing one and it is far from over.