Tiger Woods admits he will definitely return to the PGA Tour, but when exactly remains unknown. 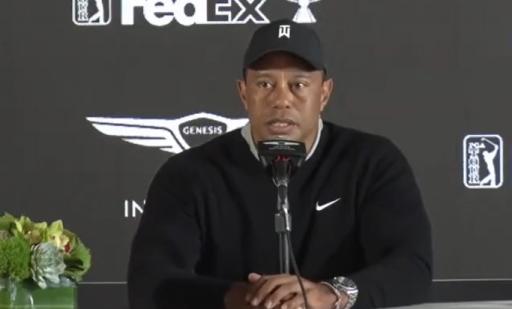 Tiger Woods has confirmed he will return to the PGA Tour at some stage but as it stands he still has no timescale for when he will be able to make his competitive comeback on the circuit.

Despite that, he wants his fans to know that he "welcomes the fight" and is very much prepared to "go another few rounds" to get back on the PGA Tour and win one more tournament to take the outright record for wins at 83.

Woods, who is tied with Sam Snead for 82 wins on the PGA Tour, was speaking to the media for the first time in 2022 as he prepares to host the Genesis Invitational at Riviera (a tournament that benefits his TGR Foundation) this week.

"I wish I could tell you when I'll play again, I want to know but I don't," said Woods.

"My golf activity has been very limited. I can chip and putt well, but I've not done any of the long stuff, seriously.

"At the PNC (December 2021) I was working on the walking part. My foot was a little messed up about a year ago. The walking part is something I'm still working on, the strength and development, it all takes time.

"What is frustrating is that it's not my timetable. I want to be at a certain place and I'm not.

"I am getting better but just not at the speed I would like. The age factor too, it's frustrating."

Woods did confirm he will be back on the PGA Tour at some point in time, though, much to everyone's delight.

"Will I come back? Yes," confirmed Woods,

"Will I play a full schedule? No, never again.

"I can play certain events here and there, pick and choose my events, majors or other events, I can do that.

"I will come back and play the Tour, yes, but not on a full-time basis."

Woods, 46, competed in the PNC Championship alongside his son Charlie Woods in December 2021 but back then he was allowed the use of a golf cart as it was not an official PGA Tour event.

He and his son performed admirably, especially Charlie, and the Woods duo went on to finish second behind John Daly and his son.

Woods spoke with great admiration at being able to get out there and play with his son in the two-day PNC Championship last December.

"I went through a difficult year but I had great fun with my son at PNC so I wouldn't trade anything for that," said Woods.

"It was just two great days. It was the best."

Pleasingly, Woods has seen some progress since the PNC Championship two months ago but also reiterated there is still a long way to go until we see the 15-time major champion back inside the ropes.

"I have seen progress and I've been able to hit more shots since the PNC," said Woods.

"But at the PNC I was in a cart. To be out here [PGA Tour] walking and playing six rounds of golf when you take into account the practice days and four competitive days, it's the cumulative effect and I just can't do that yet.

"I'm still working to get that point."

Woods confirmed he has spent time with his wedges and putter in recent weeks, but very little with his driver and 5-iron.

"Short game wise, yes I've been working on, but the long game, no," confirmed Woods.

"That involves more loading, more torquing of the leg. Walking is something I'm still working on. I can walk on a treadmill that's easy but walking on the course with undulations like out at Riviera, I have long way to go.

"My leg was not in a good position, I've had to work through a lot of tough scenarios and I have a long way to go.

"But I welcome the fight, let's go a few more rounds."

As for the structure of his right leg right now following his horror car crash in Los Angeles 12 months ago this week, Woods kept things short and sweet but was just thankful to still have it.

"It's altered," said Woods with a smirk.

"My right leg does not look like my left, let's put it that way."

He added: "I am very lucky. As a lot of you guys know, I didn't know if I would have a right leg or not so to have it still here is huge.

"I still have a lot of issues but it's mine. I am thankful for all the surgeons, doctors and nurses for all the countless surgeries and rehabs.

"The PT sessions are brutal but it's still mine and I'm very thankful for that."

While Woods would seem a major doubt to compete in golf's first major of the year at The Masters in two months time, one reporter quizzed him over whether or not the Par-3 Tournament could be of interest at Augusta National that week.

Interestingly, Woods did not fully close the door.

"I mean I could do that now [play a par-3 course] but whether I do that I don't know," replied Woods.