Tiger Woods discussed media rights and if he trusts the PGA Tour and the direction they are going amid discussion of rival leagues. 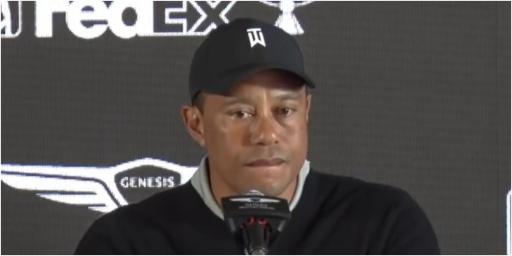 Tiger Woods faced the media last night for the first time since December and the overwhelming message was: his career is not over.

Woods, 46, spoke for 30 minutes and largely didn't reveal too much we didn't already know. It's a work in progess. It's tough.

But he will return. It's a fight. And he welcomes that fight. "Let's go a few more rounds," he told reporters at the Genesis Invitational.

There were a number of topics Woods covered. One, of course, was rival leagues and media rights.

Despite the fact that there have been "many disagreements" over the years, Woods believe the tour is in a strong place.

And, while he wouldn't comment directly on other players' opinions, it's clear that he believes there needs to be "give and take".

When asked about players' media rights - a topic that has ruffled Phil Mickelson's feathers - Woods replied:

"Yeah that's, that's something that we've had struggles [with] for decades really. Larry [Rinker] wanted to unionize our tour and we went through that whole process.

"Y'know, that, probably what we didn't understand at the time when I came out here 25 years ago is where our tour would go...where our media would go. We barely had cell phones [back then]. Barely had the internet.

"So, media rights is a big thing. A lot of us are concerned about what is the direction and where we are going and how can we have more control with that.

"There's been a lot of talk, whether it's the pack or the board or the players internally. Everyone has their opinion about it but we need to come to a collective decision.

"Jay [Monahan] has taken it all in to try and figure out what is best for each and every individual player because we are all independant contractors but also, then again, what is best for the tour as a brand as well.

More: A history of Tiger Woods' feud with Sergio Garcia

"So trying to put all that together [and] meanwhile still grow the tour at the same time and all the different media rights that have come about over the last ten years whether it's streaming - which didn't exist [before] - where do you go on that? Who owns those rights? How much do you share? Where does it go?

"But I have to say that one of the things that separates our sport so much is that we are able to have the best retirement plan there is in all of sports.

"And we have an opportunity to play well past our playing days and still earn well over a million dollars well into our 50s whereas football players are done after nine years.

Woods was then asked straight up if he distrusts the PGA Tour after Mickelson claimed they are hoarding players' media rights money.

"Jay and I started back in '03 in Boston. And so, we have built our relationship since then. We have had a great relationship.

"It adds to both sides. We want to see the game of golf grow, okay? There is opinions on how the game is going to grow and therein lies the difference.

"So collectively there are a lot of guys who believe a certain way and some guys who believe differently. But I just think that in the grand scheme of things we want to see the game of golf grow.

"Me personally, I have had a great relationship with the tour. I have been a part with it for 26 years? And, as I said, we have had our own disagreements over the years but also great constructive criticism as well."