It looks like the 15-time major champion is well and truly back in the limelight... 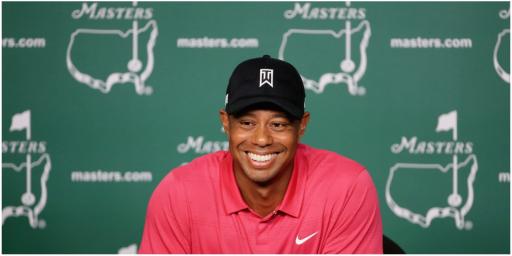 Tiger Woods the player and the public figure is most definitely back.

Making his first public appearance this week in nine months since his car crash, Woods has surprised us in many ways.

Woods revealed that amputation was "on the table" as he stared into a reporter's soul and also has been hitting balls on the range.

We now know that Woods has hit every single club in the bag and he's "able to participate in the sport of golf again".

An honor to host poker night for the @TGRFound at Albany in the bahamas for the one and only @TigerWoods. Great night for a great cause! pic.twitter.com/Mm6F0QcaDf

To what end he does not know. But his right leg appears to be taking a decent amount of weight as was filmed hitting the big stick.

The drives aren't going as far as he would have liked but he joked: "I haven't heard them land yet".

Woods dodged questions about what put him in the hospital for three weeks.

Instead, he wanted to focus on golf, his future and of course the TGR Foundation which has celebrated it's 25th anniversary this year.

One of the fundraising events Woods appears to have taken part in was a poker night (pictured above).

Phil Gordon, a professional poker player, posted the pictures of Woods at the event on his Twitter profile.

Gordon was one of the ambassadors of the now defunct Full Tilt Poker software.

The United States' government seized Full Tilt Poker's assets in April 2011 and Gordon was later named in a civil suit.

That came when the authorities effectively stopped all online poker in the United States in what is now known as Black Friday.

Tens of millions of dollars worth of players money was seized and the company was later bought out by PokerStars.

The claim against him was dismissed after it was agreed he wasn't involved in the decision making.

Woods has not confirmed whether or not he will play in the PNC Championship with his son Charlie.

The event sees major champions team up with a member of their family in a relaxed, fun style event in Orlando.

Nelly Korda is playing with her father in a few weeks' time.

Woods has fueled the speculation that he could play as it has emerged the tournament hosts are reportedly holding a slot for him.