Tiger Woods is said to have been "agitated" after being delayed on his way to give Drew Brees a golf lesson. 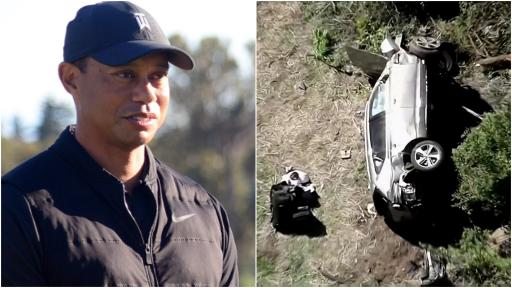 Tiger Woods is said to have appeared "agitated and impatient" as he left his hotel some 15 minutes before his shocking car crash on the border of Rolling Hills Estates and Rancho Palos Verdes in Los Angeles on Tuesday morning.

A member of crew working on the TV show 'Grown-ish' was staying at the same hotel (Terranea Resort) as Woods, and he told TMZ Sports that the former World No.1 nearly hit his director's car just before 7 am local time.

"Production sources tell TMZ, when the director arrived just before 7 am, Tiger was driving his SUV very fast as he was leaving the property and he almost hit the director's car," reads the TMZ report.

"The director was shaken enough to tell production staff about it after he parked."

A member of production crew, named Oliver Konteh, told TMZ he saw Woods get into his SUV at the hotel and that he appeared "agitated and impatient" after being blocked in by another car that was loading luggage.

Konteh explained that once the delay was over, Woods "took off fast."

A source close to the investigation has told the Los Angeles Times that Woods was heading off to the Rolling Hills Country Club about 20 minutes away for some filming with Golf Digest and GOLFTV.

Golf Digest confirmed Woods was on his way back to the country club for an additional photo and video shoot when the crash occurred.

Woods, who had been given a GV80 costing just shy of $50,000 by Genesis to drive for the week, crashed the vehicle at 7.12 am on the border of Rolling Hills Estates and Rancho Palos Verdes in Los Angeles.

The 15-time major champion has reportedly suffered "comminuted open fractures" to both the upper and lower portions of his tibia and fibula in his right leg, as well as damage to the ankle bones and trauma to the muscle and soft tissue of the leg.

Woods, who recently underwent a fifth back surgery, is now recovering from major surgery to his legs and ankle.

An investigation is ongoing as to what exactly caused Woods to lose control of his vehicle.