Viktor Hovland flies home to win the Hero World Challenge - then he tells Tiger Woods what he used to do in class. 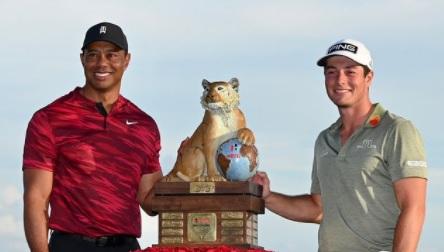 Viktor Hovland stormed home to win Tiger Woods' Hero World Challenge at Albany in the Bahamas last night - and then he told the torunament host that he used to watch his own highlights while sat in class.

Hovland, 24, has now won the last two tournaments to round out his year following victory at the World Wide Technology Championship at Mayakoba last month.

As a result of his latest win in the 20-man Hero World Challenge, the European star now vaults to a career-best seventh in the Official World Golf Rankings.

Hovland received his trophy from Woods, and then revealed how he used to watch YouTube highlights of the 15-time major champion while he was sat in the classroom.

"I remember sitting in class watching his highlights on YouTube," said Hovland.

It's fair to say the Norweigian golfer certainly put those minutes to good use on Sunday as he carded a sublime final round of 66, highlighted by back-to-back eagles at 14 and 15.

Hovland may have closed with bogeys at 17 and 18 but it was enough to hold on for a one-shot victory on 18-under par.

Collin Morikawa had the tournament in his grasp heading into the final round at 18-under par, but the American had a day to forget as he closed with a 76 to finish tied fifth on 14-under par.

Morikawa would have moved to World No.1 for the first time in his career had he gone on to win.