Tom Brady asks for historic ball back... fan wants ROUND OF GOLF in return!

Tom Brady records yet another landmark in the NFL. Only this one costs him a round of golf, and a bit more! 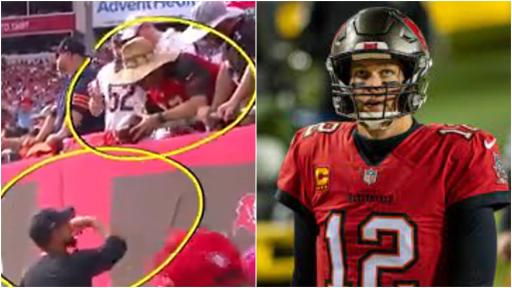 Golf-mad Tom Brady recorded yet another landmark in the NFL on Sunday as he threw his 600th touchdown ball of his legendary career.

Brady, a seven-time Super Bowl champion with the New England Patriots and now with Tampa Bay Buccaneers, helped his side trounce Chicago Bears 38-3 at the Raymond James Stadium at the weekend.

But things turned a bit awkward in the first quarter when wide receiver Mike Evans received a pass from Brady to score a touchdown.

Related Articles
FedEx Cup Standings: How the top 70 looks heading into the BMW Championship
FedEx St. Jude Championship: How much they all won

Evans rushed over to the crowd and handed his ball in typical American Football fashion to a fan named Byron Kennedy.

What Evans seemed to forget in the adrenaline-fuelled moment was that this was a historic 600th touchdown ball for his quarterback Brady, who wanted the ball for his trophy cabinet.

Kennedy's excitement at holding the ball was short-lived, however, as a Buccs trainer trudged over to him to negotiate a deal to give back the ball.

It's fair to say Kennedy did pretty well out of it all, in fact very well, and there could yet be more to come with a round of golf with Brady.

Kennedy has already received two signed shirts and a helmet from Brady, a signed jersey from touchdown scorer Evans, $1,000 to spend in the Buccs shop, and two season tickets for this season and next.

"Giving it up was tough," said Kennedy to the press after the game.

"The trainer came over and asked for it. But what am I going to do? Say no to Tom Brady?"

For anyone questioning Byron Kennedy giving the Tom Brady 600th TD ball back to the Bucs, here's a rundown of what he got: 2 signed jerseys and helmet from Brady, a signed Mike Evans jersey and his game cleats, a $1,000 credit to team store and TWO season passes this year & next.

.@TomBrady got his ball back pic.twitter.com/khPgn9Bcxo

Brady later told the press that it was "pretty cool" for Kennedy to give the ball back.

Kennedy has apparently told NFL that while he is delighted with all his goodies, he would love one more thing.

"A round of golf with Tom, as a repayment," said Kennedy, adding: "I think that would be pretty cool."

Given just how much love Brady has for the sport, we are fairly certain the NFL legend will agree to such terms.

NEXT PAGE: DEFENDING PGA TOUR CHAMPION BUMPED OFF THE PLANE DUE TO HEAVY PLANE!