Tom Kim rips his pants (TWICE!) at the Presidents Cup 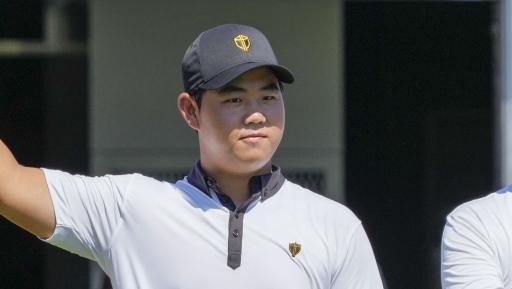 Tom Kim has embarrassingly split his pants not once but twice ahead of the Day Two Fourballs at the Presidents Cup.

Kim, 20, is making his Presidents Cup debut in Trevor Immelman's International side at Quail Hollow Club this week.

According to reports, Kim split his first two pairs of trousers while warming up on the range.

The South Korean then had to borrow another golfer's spare pants in order to play his round.

When the players heard that Kim had split his second pair of pants, his International team-mate Mito Pereira said: "Again?!"

Kim joins Hideki Matsuyama for the Day Two Fourballs and they are up against best friends Xander Schauffele and Patrick Cantlay.

When Kim did eventually get to the first tee with a pair of trousers that fit him, he wasted little time getting the crowd going as he encouraged them to cheer during his opening tee shot.

He then twirled the club as his ball bounded into the fairway bunker.

It's fun to watch players have fun pic.twitter.com/Nwgd0rX4Bq

Kim claimed his maiden victory on the PGA Tour at the Wyndham Championship last month.

The 20-year-old tied the second-lowest nine-hole score in PGA Tour history when he went out in 27 strokes at Sedgefield Country Club.

That included a remarkable six birdies and one eagle.

Kim's victory meant he became the second-youngest winner on the Tour since the Second World War.

Jordan Spieth was the youngest when he claimed the 2013 John Deere Classic at the age of 19.

What's more incredible is that Kim started off this tournament with a quadruple bogey, and he still won by five strokes.