Why is Joohyung Kim called 'Tom'? You won't believe the answer...

Joohyung Kim has made headlines for his unexpected recovery this week at the Wyndham Championship, but something else unexpected has also caught attention. 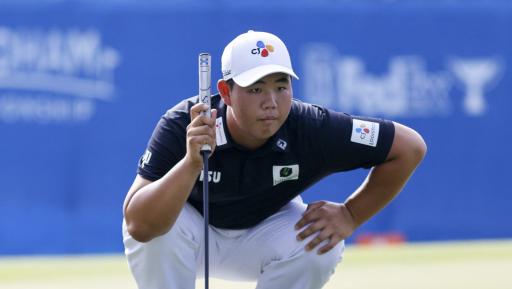 Joohyung Kim accepted a special temporary membership from the PGA Tour in July, rewarding him with unlimited sponsorship exemptions in order to earn his card for 2023.

He has risen to 34th in the world rankings after impressive efforts at the Rocket Mortgage Classic and the Genesis Scottish Open this season and he needs to accumulate as many non-member points as the final eligible member in the FedEx Cup standings to qualify for the Playoffs.

Kim also impressed at The 150th Open Championship at St Andrews. In only his fourth major appearance, during which he played with LIV Golf rebel Patrick Reed, he came tied 47th.

He has emerged as a surprise package on the PGA Tour in 2022 and the 20-year-old is currently tied for the lead at the halfway stage of the Wyndham Championship.

Despite making a quadruple-bogey on his first hole in the first round, Kim has carded scores of 67 and 64 in North Carolina to reach 9-under-par alongside Brandon Wu.

He may have unexpectedly become one of the hottest prospects on the Tour, but what is even more unexpected is his nickname which he developed from a young age.

His nickname is Tom and this is because as a child, he had a strong love for Thomas the Tank Engine. Yes, you read that correctly. All of his friends and family call him Tom for this reason.

At the Corales Puntacana Resort & Club Championship in 2020, the South Korean was introduced to the media as 'Tom' and quite rightfully, he had some explaining to do.

"Actually, it was Thomas. I got it from Thomas the Train when I was young. As I grew older, some people started calling me Tom and I thought it was just shorter and more simple. I think by the time I was 11 I just went by Tom," said Kim who was 18 at the time.

"My brother even calls me Tom. It was kind of natural. And my family calls me Tom as well, my friends call me Tom, so it kind of just came natural to me. It was that kind of name."

He told the media he had all the toys and even a Thomas the Tank Engine lunchbox. You can understand a child's love for such a popular programme, but you wouldn't expect it to catch on to his name into his adult years.