US continue to dominate International side at 2022 Presidents Cup

The United States opened up a commanding lead at the 2022 Presidents Cup with a dominant display over the International side at Quail Hollow Club. 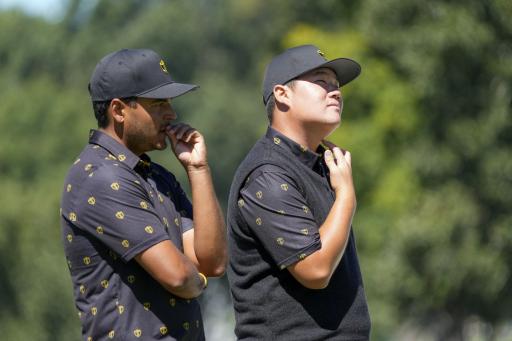 The United States continued to dominate the 2022 Presidents Cup despite a spirited display on Friday by Trevor Immelman's International side.

Davis Love III - who unintentionally roasted LIV Golf's Bryson DeChambeau earlier in the week - previously insisted his side had "a long way to go" after opening up a 4-1 lead on day one.

But as the sun set over Quail Hollow Club in Charlotte his side had a comfortable advantage, finishing the day leading 8-2.

Both teams have lost players to the controversial LIV Golf Invitational Series. The Americans are missing the likes of Dustin Johnson, who was their talisman at last year's Ryder Cup at Whistling Straits.

But it is clear that Immelman's International side have been more adversely affected by the players who have defected to Greg Norman's LIV Golf Tour.

Cameron Smith - who is the highest-ranked player to join the mega money upstart - was unavailable for selection due to his $140m switch.

Immelman's side has as many as eight debutants.

The 42-year-old captain split up his experienced day one pairing of Adam Scott and Hideki Matsuyama and instead put the Australian - who was brutally honest earlier in the week - with Cam Davis.

The pair were defeated by a pumped-up Justin Thomas and Jordan Spieth, losing 2&1 in the fourballs.

Sungjae Im and Sebastian Munoz put in a spirited performance as they tied with Scottie Scheffler and Sam Burns.

Scheffler is the first reigning World No.1 who has not won either of his opening matches in the Presidents Cup since Norman in 1996, according to golf stat man Justin Ray.

The Masters champion had a putt to win the match at the 18th hole but couldn't believe that his putt stopped seemingly a matter of millimetres from dropping.

Mito Peireria - who has reportedly already signed with LIV Golf - and Christiaan Bezuidenhout also halved their match with Kevin Kisner and Cameron Young.

PGA Tour rookie Tom Kim, playing alongside the aforementioned Matsuyama - went down 3&2 against the seemingly unstoppable pairing of Xander Schauffele and Patrick Cantlay.

Kim was involved in an hilarious incident as it was revealed he had ripped his trousers (for the second time this week) moments before teeing off.

In the final match, Presidents Cup rookie Max Homa, who has won four times on the PGA Tour now - was simply a man possessed down the stretch.

He sent two towering iron shots into the 17th and 18th greens and duly converted both birdie putts to win 1UP with Billy Horschel against Corey Conners and Taylor Pendrith.

Thomas told the media: "Yeah, it was great. It was another kind of bizarre day for me personally in terms of some of the shots I hit.

"But, man, we ham and egged it so well. Jordan really, really came through for us those last five, six holes."

There will be 12 singles matches on Sunday.

The US have won 11 of the previous 13 meetings, with the International team winning once and another match tied.

Next page: 9 players who changed their mind about LIV Golf