Fleetwood may have lost his PGA Tour card but he returned to form on the European Tour in Italy at the weekend. 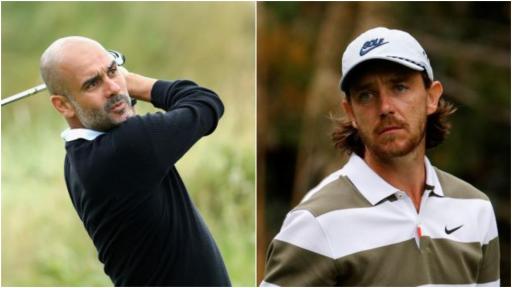 Tommy Fleetwood may have lost his PGA Tour card after an indifferent run of results on the circuit but he returned to form on the European Tour with a runner-up finish behind Nicolai Hojgaard at the Italian Open on Sunday.

Fleetwood drained a 15-foot putt for birdie at the final hole to at the time draw level with Hojgaard and early clubhouse leader Adrian Meronk, but it was only of consolation when the 20-year-old Dane birdied the final hole in the group behind him.

Tommy ties the clubhouse lead on 18!

Felt great to be in contention this week - lots of positives & confidence to take to Wentworth. Massive thanks @ItalianOpen for a great event and to the people of Italy for making me feel half Italian!
Congrats to Nicolai, I’m sure it won’t be the last Højgaard victory on Tour… pic.twitter.com/RLMkUHZEB7

Nevertheless, his tie for second marked the Ryder Cup hero's best finish on Tour since a solo second in the Scottish Open last October.

Despite once being in the top 10 in the Official World Golf Rankings, Fleetwood, who has not won on Tour since the 2019 Nedbank Golf Challenge nearly two years ago, finds himself in 37th position.

Fleetwood lost his PGA Tour card this season as a result of just two top-10 finishes on the circuit, which saw him finish 137th in the FedEx Cup standings.

He has already locked up his place in this month's Ryder Cup against the United States, though.

Fleetwood will now be looking to build on his latest performance at this week's flagship tournament on the BMW PGA Championship at Wentworth.

"Let’s face it, I haven’t played great this year and I haven’t had the year that I want to and every week is the chance to start again in golf, that is the beauty of it.

"I am trying to work hard, I’m trying to get better, and you never know what can turn things around.

"I’ll just keep turning up, keep trying to do the right things and play."

Manchester City manager Pep Guardiola was asked about his golfing relationship with Fleetwood during a press conference last week, and he said that he has been working on a number of practice drills given to him by the Englishman.

"I have Tommy Fleetwood as a good teacher so I have some drills," Guardiola said earlier this week.

"We play once a year. His schedule is busier than mine."

Fleetwood was asked about that earlier in the week, and he said it was the other way round.

"He gets a little bit bitter about it but he’s a much busier man than I am," said Fleetwood.

"I learn nothing from him. He never gives me any advice at all. It’s all a one-way street. Nothing at all. One-way street. You can tell him that."

NEXT PAGE: WAS NELLY KORDA'S SOLHEIM CUP CONTROVERSY THE WORST EVER?