Tony Finau finally secured the second PGA Tour title of his career after beating Cameron Smith in a playoff at Liberty National. 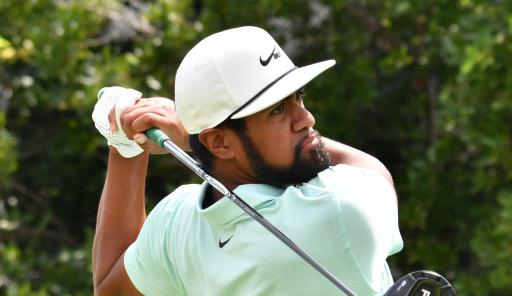 Tony Finau can breathe a sigh of relief after he has finally won his second PGA Tour title at the Northern Trust, beating Cameron Smith in a one-hole playoff.

It had been 142 PGA Tour events and 1,975 days since his only win at the 2016 Puerto Rico Open at Coco Beach, but a round of 6-under-par on Monday afternoon helped him to victory.

The popular American earned 2000 FedEx Cup points which has propelled him to number one in the FedEx Cup standings, having started the week in 23rd place.

"It means everything at this point in my career. A lot of work since my last win, I'm a totally different player and I wanted to prove this to myself more than anything else," said Finau.

"Jon's a good friend, I knew he was going to be really hard to beat. He and Cam were playing great and I gave it everything I had and fortunately, I ended up on top."

Finau began the day two shots behind Smith and Jon Rahm on 14-under-par and he began his final round with two birdies in his first four holes to move to within one shot of Smith.

The Australian faltered on the 5th hole by making a double-bogey, while Rahm moved along steadily to 18-under-par after nine holes to lead by two shots heading into the back nine.

This was when Finau came into his own. The 31-year-old made a birdie on the 12th hole, a fantastic eagle on the 13th hole and another birdie on the 14th hole to climb into contention.

The man from Salt Lake City found another birdie on the 16th hole and made a brave up-and-down on the 18th hole to card a 65 and finish on 20-under-par.

Smith followed suit on the back nine at Liberty National, he made four birdies in his last seven holes to recover and post 20-under-par as well.

It wasn't to be for the World No. 1 Rahm as he made critical bogeys at the 15th and 18th holes to fall back to an 18-under-par total for the week.

Finau and Smith returned to the 18th hole for the playoff, but Smith gifted his opponent the win by slicing his tee shot out-of-bounds. Finau made a solid par to secure the Northern Trust title.