Tony Finau goes back-to-back on the PGA Tour as he picks up his fourth career title. 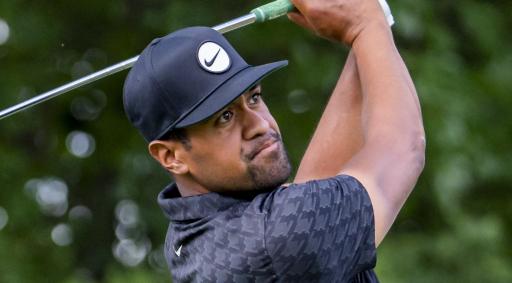 Tony Finau has gone back-to-back on the PGA Tour for the first time in his career with a commanding victory at the Rocket Mortgage Classic at Detroit Golf Club.

Finau has now won four times on the PGA Tour and his latest win bumps him up to seventh in the FedEx Cup standings.

The big-hitting American made just one bogey all week (par-3 11th in the final round) and his 64-hole stretch of going bogey-free was the longest of his career.

He was 0-5 with the 54-hole lead heading into the final round at the Rocket Mortgage Classic, so he will no doubt be pleased to have erased that one.

Finau's 26-under par total is a tournament record.

"It feels amazing, last week was amazing, I was actually quite disappointed with my finish last week so just wanted to show I'm a winner and a champion this week and I think I did that," said Finau.

"The work has been relentless, to get rewarded for it, you never know in this game, keep moving one foot in front of the other and good things happen."

Finau had been enduring something of a slump prior to the Mexico Open at the start of May with just one top-20 finish all year.

But he soon turned things around with a tie for second in Mexico before adding a tie for fourth at the Charles Schwab Challenge and a solo second behind Rory McIlroy at the Canadian Open in June.

Finau missed the cut in the US Open and finished tied 28th at the 150th Open Championship earlier this month, but he then returned to his homeland to win consecutive events on the PGA Tour at the 3M Open and Rocket Mortgage Classic.

How does @TonyFinauGolf follow up his first bogey of the week ...

With a birdie and a fist pump

Finau and Pendrith started the final round of the Rocket Mortgage Classic tied at the top on 21-under par but it was Finau, aided by the confidence of last week's victory, who made the early move with birdies at 4 and 7.

The tournament-ending move was then made at the 12th as Finau responded from a bogey at the 11th by draining a 30-footer for birdie. Pendrith then failed to get up-and-down for par from just off the green and the lead quickly stretched to four shots with six holes to play.

Finau birdied the remaining par-5s at 14 and 17 to see out a round of 67 and a convincing five-shot victory on 26-under par.

Cantlay started the final round six shots off the pace but he did his best to put his pressure on Finau by going out in 31 shots.

The reigning FedEx Cup champion then made a superb eagle at the par-5 14th from six feet to get within three shots of the lead, but Cantlay's charge was ultimately too late in the day and he finished in tied second alongside Young and Pendrith on 21-under par.

Pendrith will have been disappointed with his final-round 72 but he will at least take heart from his best-ever finish on the PGA Tour.

The Canadian was forced out of action for 17 weeks with a fractured rib but he has now recorded three consecutive top-15 finishes since his return to the game.