This Korn Ferry Tour pro had one putt for victory and another to get into a playoff. In the end, he tied for sixth. This is what he had to say. 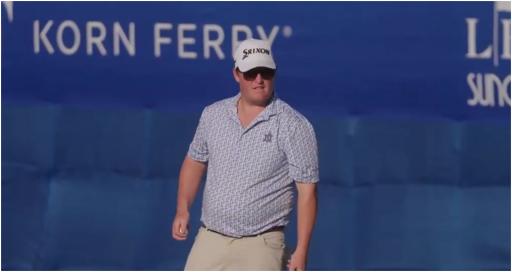 A Korn Ferry Tour player must have thought he was in a nightmare after four-putting the final hole on the brink of victory.

The player in question was Michael Gellerman. He had a putt to win the LECOM Suncoast Classic but what unfolded was truly disgusting.

It really was as bad as you can get. Vomit-inducing. Stomach-churning. I mean, you really have to feel for Gellerman, 29, here.

When he finally walked off the green and shook hands with his fellow playing partners looking visibly sick, he had in fact tied for sixth.

It was the self-deprecating Ben An who emerged as the winner with a one-stroke victory over South Africa's MJ Daffue.

That was his first PGA Tour sanctioned victory in 154 starts. An is undoubtedly talented but lost his PGA Tour playing rights last season.

An has been working with Tiger Woods' former coach Sean Foley and the instructor later paid tribute to his hard work in an emotional post.

"What do we do now? What did we do wrong? Where are we not seeing it?" he posted, referencing their dark times.

"Maybe, I am not the right coach for Ben? These were all questions that bounced around my consciousness."

Foley added: "As I woke up today, I arose with the most special feeling. Benny, YOU EARNED this.

Skip to 9.31 on the footage, courtesy of the Korn Ferry Tour

Still nothing for the average joe to grumble at, but still, the chances to win in pro golf at the higher level of the game are so fleeting.

Gellerman reflected on that moment and took to social media to thank all the supporters for their messages, vowing to come back:

It was a tough sleep last night. That one hurt to let slip away. I was simply not good enough. I appreciate all the kind texts/messages and all the support. I’ll be back! @TurtlesonTour @SrixonGolf

The power of resilience. @ByeongHunAn earns his first #KornFerryTour title at the LECOM Suncoast Classic, as he chases a @PGATOUR return via The 25! pic.twitter.com/W8LSgBna9W