Paulina Gretzky looked to enjoy herself at her Bachelorette Party with a large group of friends as she prepares to marry Dustin Johnson. 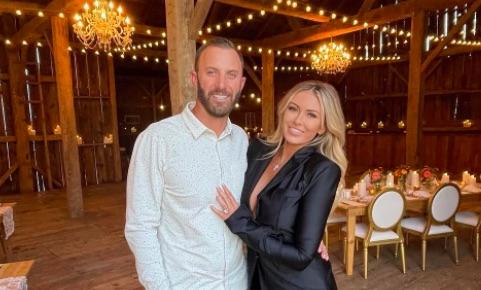 Dustin Johnson and Paulina Gretzky are still keeping their cards close to their chest with regards to their wedding date.

However, golf fans have been treated to arguably the biggest clue yet as Paulina held her Bachelorette Party with a large group of friends.

In the Twitter post below from Claire Rogers, Paulina is standing halfway up a set of stairs at the door of a plane, with her friends all standing at the bottom.

This would suggest that the group may have jetted off to an exotic location for her pre-wedding party and by the looks of the drinks menu, they must've had a great time.

Each drink included different mixtures of vodka, tequila and fruit juices. This could suggest further that the event was held in an exotic location.

We do not deserve the Paulina bachelorette content we are about to be blessed with pic.twitter.com/IaK4ebxfos

In 2021, Johnson and Paulina revealed that they will get married at Blackberry Farm, a five-star resort in Walland, Tennessee, which has an attractive brewery and other great features.

However, we are still unsure about when the ceremony is going to take place. Having got engaged in 2013, Paulina has previously spoken about her fiancée's hectic PGA Tour schedule as the reason for not getting married yet.

And it certainly is a hectic schedule, but one that the former World No.1 has found a lot of success on. He is a two-time major champion and a winner of 24 PGA Tour titles.

He is not due to tee it up at the Honda Classic this week and he has only made three appearances in the 2021/2022 season. Perhaps the pair have finally found the time to plan their wedding properly?

Now we have seen confirmation of Paulina holding her Bachelorette Party, maybe we will see pictures of Johnson's stag do emerge in the near future.

NEXT PAGE: TOUR PRO REACTS AFTER FOUR-WHACKING FINAL HOLE ON BRINK OF VICTORY