Collin Morikawa had an awkward moment at the Genesis Invitational when he wandered onto the tee box as Justin Thomas took aim. 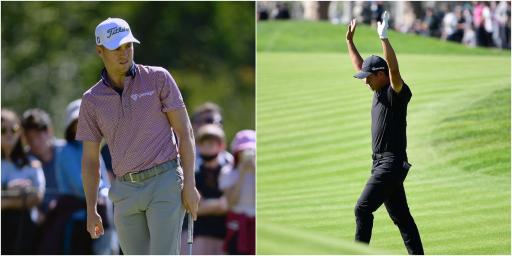 Collin Morikawa went on the charge on Sunday at the Genesis Invitational but ultimately came up short of his sixth PGA Tour win.

The 25-year-old went lower than anyone else in the top-10 at Riviera on the final day with a 6-under 65 which saw him hole out for eagle twice.

It's a familiar story these days. A tournament leader looks like they will sail to victory. Then here comes Collin.

Morikawa's round also included one of the more embarrasing moments of the day at the drivable, par-4 10th hole

Justin Thomas was taking aim. He was set-up. He was good to go. He had given it the famous JT pre-set.

Then a wild Morikawa appears out of nowhere.

Watch as he slowly walks on the tee box to the sounds of "Collin! Collin!". Well, at least the crowd weren't shouting, "Get in the hole!".

It was Joaquin Niemann who prevailed and claimed his second PGA Tour victory at Tiger Woods' tournament after going wire-to-wire.

Related: Justin Thomas hits it to five feet and still gets slated

Morikawa was asked about his chip ins at 7 and 10 and which one - in his opinion - he thought was harder.

"It's like when you hit it and you just know. I actually thought it was going to be left and just spun straight right. I want to see it on video. Colt Knost told me that we weren't even on air yet.

Did he think his shot into 10 was a little bit too hot?

"I think it still would have stopped, but it might have hit a foot off the cup, but I still think it would have been two, three feet max. I clipped it perfect," he said.

I knew I should’ve just hit you… taken one of the competition out! https://t.co/bmTJiQR7Tv