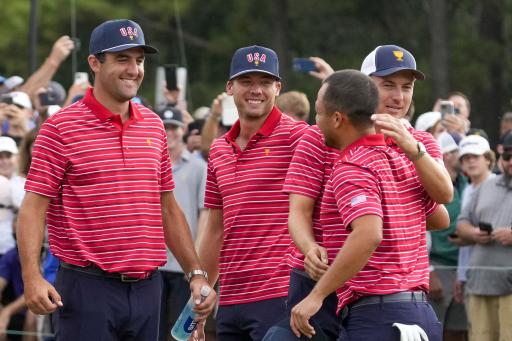 The USA has won the Presidents Cup for the ninth time in a row against the International side with Xander Schauffele scoring the decisive point against Corey Conners.

Schauffele was never down against his Canadian opponent who struggled on the greens throughout the week at Quail Hollow. The American's 1 up win took his team to the required 15.5 points.

Before he finished his match, Jordan Spieth, Patrick Cantlay and Tony Finau earned points in the singles, while Sam Burns halved with Hideki Matsuyama in what was America's youngest ever side in the event.

Captain Davis Love III has kept his nation's unbeaten home run in the tournament intact, while Trevor Immelman's gutsy Internationals are still yet to win since 1998.

Cam Davis got off to a hot start to his match against Spieth who'd never won a singles match in the Presidents Cup until today. The Australian made eight consecutive pars, to begin with, which was enough to lead 1 up.

Spieth levelled things at the turn and began to turn the screw. He birdied holes 11, 12 and 13 to go 3 up with five holes left. The three-time major champion sealed the deal on 15 in a 4&3 win. This was the first result of the day and America edged closer to victory.

Si Woo Kim and Justin Thomas had a great tussle in the top match. Thomas was 2 up through the first seven holes, but Kim cut this deficit with a par on the 8th. With two more birdies on 10 and 11, the fellow Players Championship winners were all-square.

Kim went ahead for the first time in the match with a birdie on the 16th, but Thomas answered with one of his own to square things up on the last hole. The South Korean got over the line with a wonderful birdie on 18 to win a wonderful match.

Cantlay was in fine form all week in North Carolina and he kept Adam Scott at arm's length throughout proceedings on Sunday. He was 2 up halfway through the match and he settled things with a par on the 16th hole to win 3&2. It was now 13-8.

Matsuyama went 2 up through the opening nine holes against Burns who went winless throughout the week on his Presidents Cup debut. The American made birdies on 10, 11 and 12 to go 1 up.

This would have won the match …

Hideki Matsuyama and Sam Burns tie their match and each earn a half point for their teams @PresidentsCup. pic.twitter.com/N97lOI4FYl

Matsuyama, playing in his fifth Presidents Cup, won the 15th to make it all-square and after his chip on the 18th hole rattled the pin and stayed out, he and Burns shared a half.

Scottie Scheffler and Sebastian Munoz had an up-and-down battle. The World No.1 went 2 up after six holes, but the Colombian won holes 8 and 9 to make things all-square.

Munoz dominated the back nine and with a birdie on the 15th hole, he went 2 up against The Masters champion. The rookie beat Scheffler 2&1 to keep the Internationals hanging on by a thread on 13.5-9.5.

Finau, a two-time winner on the PGA Tour in 2022, burst out of the blocks and went 2 up in the first two holes. But by the 8th hole, Taylor Pendrith had made four birdies and now he was 2 up.

But the popular American made five birdies on the back nine and sealed the deal with a birdie on the 17th, securing a 3&1 win to take America to 14.5 points and within one point of the cup.

It was a race for who could seal the deal for the US side. Collin Morikawa was 3 up with four holes left against Mito Pereira, but the timing fell to Schauffele who made a par on 18 to confirm the victory.

Morikawa eventually won 3&2 against his Chilean opponent. This was after K. H. Lee scored his second point of the week by beating Billy Horschel 3&1.

Tom Kim missed a birdie putt on the final hole to surrender a 1 down loss to Max Homa and South African Christiaan Bezuidenhout impressively beat matchplay specialist Kevin Kisner 2&1 in the bottom match.