Tiger Woods' son Charlie Woods gave an interview after shooting a 68 in the Notah Begay III Junior Golf National Championship with his dad on the bag. 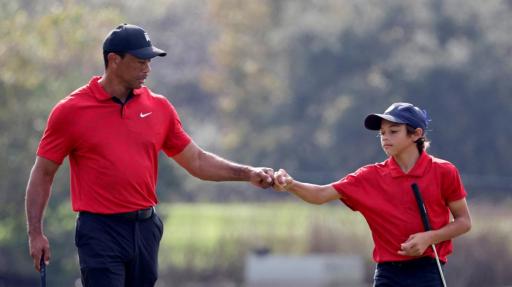 Playing in the boys aged 12-13 section, young Woods, 13, shot a round of 80 on Saturday but he carded one of the lowest scores of the day on Sunday with a superb 68.

A career low round for Charlie Woods!

Tiger was his caddie for the day too pic.twitter.com/9ZLxLaQv1n

With a 15-time major champion on the bag, Charlie played his best golf and in an interview after the event at Mission Inn Resort, it was also revealed that he almost made an albatross on the par-5 14th hole.

The young star, who came second in the PNC Championship with his father on the PGA Tour in 2021, finished tied fourth and 11 shots behind Darren Zhou from Hong Kong.

It is always exciting to see Tiger out on the golf course. While he caddied for his son, the 46-year-old wore a Presidents Cup cap and a black protective sleeve on his right leg which was heavily injured in his serious car accident in February 2021.

#NEW: A Charlie Woods interview following his low round of the day at the Notah Begay qualifying event in central FL ☢️. Tiger was on site. pic.twitter.com/FDbFRgzZ6n

However, it wasn't Tiger who we heard from after the junior event in their home state. We heard from Charlie who spoke about the privilege of having such a knowledgeable caddie, as well as his near albatross.

"Dad told me to stay patient and I just played steady golf. Just stay patient, play and focus on each shot. Don't look too far ahead and stay in the game," Charlie said.

"It was awesome, I couldn't have done it without him. For some shots, I would've been so off but he steered me on the right course."

Earlier this month, we saw Woods hitting balls on the driving range at Liberty National in New York alongside Sam Burns. He was hosting the Nexus Cup, an event for amateur golfers.

It is likely that we could see the Woods duo play at the PNC Championship again this year. They came second in the popular father/son event behind John Daly and his son last December.