Viktor Hovland rolled in another birdie at his final hole on Sunday to win the Mayakoba Golf Classic in Mexico. 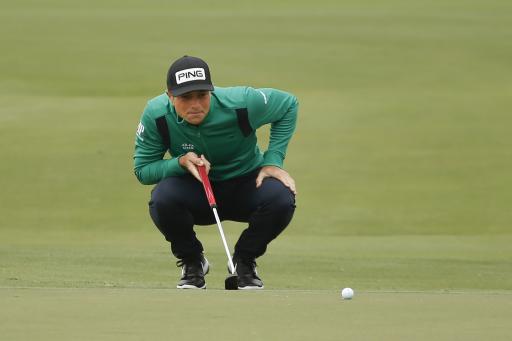 Viktor Hovland claimed his second PGA Tour title of the year on Sunday after he birdied his final hole to win the Mayakoba Golf Classic at El Camaleon Golf Club in Mexico.

Aaron Wise set the clubhouse target after his stunning 8-under par final round put him on 19-under for the tournament and the American was keeping himself warm on the range, anticipating a play-off against Hovland.

Hovland then stuck his approach on 18 to eight feet, before rolling in the putt for birdie to win his second PGA Tour title, much to the delight of these Norwegian commentators, who were thrilled to see their nation's superstar win again.

WATCH THE EPIC NORWEGIAN REACTION IN THE VIDEO BELOW:

With two PGA Tour titles before the age of 24, Hovland joins an elite club, with only four other golfers accomplishing this feat since 1945; Rory McIlroy (6 titles before he turned 24), Seve Ballesteros (3), Sergio Garcia (3) and Jon Rahm (2).

"When I was standing on the 18th tee I knew I had to make a birdie to win and I told myself I was able to do it in Puerto Rico, hopefully I can do it today," said Hovland, who sunk a 30-footer for birdie to win the Puerto Rico Open in February.

"You know, it's still hard and I just try to take one shot at a time. And luckily this putt, even though the putt this time wasn't as easy as the one in Puerto Rico, you're not really expecting to make a 30-footer really ever, it just happened to go in.

"It's not like you can just kind of force yourself to make it, it's a lot of things that have to go your way for it to go in the hole."

Hovland took the lead early on Sunday, with four birdies in his first six holes, whilst overnight leader Emiliano Grillo shot a 1-over par final round to finish in a tie for 8th.

Heavy rain caused the Mayakoba Classic to be delayed during the final round, but Hovland came out firing when the players returned, as did Wise with an opening nine of 31.

Wise's hot streak continued on the back nine with three birdies in a row, before parring in to set the bar at 19-under par.

Adam Long chased Wise's lead down with four birdies on the back nine, but a bogey at 17 took him out of the running and he finished T3 with Tom Hoge at 17-under par.

Hovland missed the fairway coming down the last and it looked as though we were in for an exciting play-off, but the Ryder Cup hopeful stuck his approach close and rolled it in for a 6-under par final round and victory.

NEXT PAGE: Abraham Ancer reveals he missed first 9 cuts on PGA Tour due to Rory McIlroy