Abraham Ancer struggled in bhis first year on the PGA Tour and has revealed it was after he watched Rory McIlroy on the driving range. 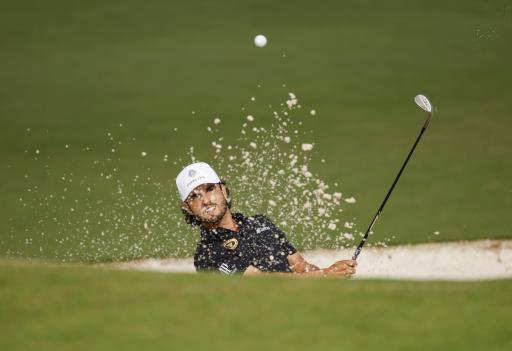 Abraham Ancer got off to a tough start on the PGA Tour, missing the cut in his first nine events and the Mexican has now revealed that Rory McIlroy inadvertently caused him to try and change his game, which led to the early collapse.

This week, Ancer is playing in his home country of Mexico at the Mayakoba Golf Classic, where he has become a hero in his nation due to his sudden climb in the World Rankings.

Ancer, now World No.22, has been in excellent form on the PGA Tour over the past few seasons and he looked as though he would give Dustin Johnson a run for his money during the final round of The Masters, but it wasn't to be.

The 29-year-old certainly didn't arrive in style on the PGA Tour and quickly found himself back on the Korn Ferry Tour after his first year.

His first PGA Tour event was the 2015 Frys.com (now Safeway) Open and while preparing for the event on the driving range, a certain four-time major champion began practicing next to Ancer.

"So I was playing my first event ever on the PGA Tour," said Ancer. "It was in Napa, the Safeway. Rory [McIlroy] -- I was hitting balls on the range, hitting 7-irons and it was kind of cold in the morning and Rory sets up next to me. I think it was the first time ever that he played that event. I was like, man, this is awesome."

Ancer was blown away with what McIlroy was doing next to him and with Ancer not being known as one of the Tour's big hitters, panic quickly settled when he saw the pure power that the Northern Irishman possessed.

"I was like, 'oh, my God, I can't do that.' I started thinking I need to hit it higher and farther, so I started tinkering and that was a terrible idea, but I just didn't know better. I struggled for a long time, just missing cuts, just was trying different things and it wasn't really going my way."

Changing his game proved costly for Ancer, who then missed the cut for his opening nine PGA Tour events, a devastating feeling for a rookie.

"I got to the PGA Tour and I quickly realized that I made huge mistakes trying to play golf like other golfers," he added. "I didn't play my game. I switched equipment, I did a bunch of things trying to play like the top guys in the world and that really hurt me. I mean, it went downhill quickly.

"But I'm thankful I did that and I learned a lot of lessons really quickly. In those five short months I just played terrible golf. I learned so much, and right after that I was like, you know what, I'm going to go back to playing my game."