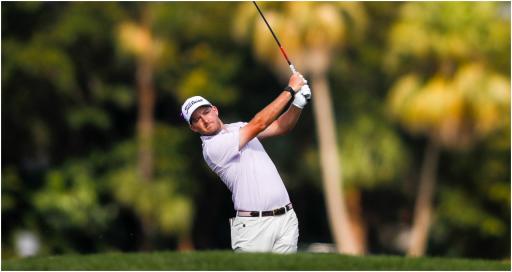 PGA Tour player Lee Hodges decided to get creative at the Honda Classic when faced with a treacherous shot at The Bear Trap.

Hodges was playing the 15th hole - the 191-yard par-3 - when he sent his tee shot into the back left bunker.

At 4-under par he was out of the race but one of only a handful of players who were under par at PGA National on Sunday.

This will likely end up costing him a large chunk of cash.

Hodges was faced with the ball below his feet and so decided to take a swipe at the ball with his putter. As you do.

He got the ball out. The only problem was the ball didn't stop and it ended up rolling into the water. Just.

Hodges, 26, managed to escape relatively unscathed after splashing his third shot out of the water.

His trousers barely had any mud on them.

Full marks for creativity, then. The Bear Trap has a reputation for carnage and Hodges was just one of a number of victims.

More: The one thing Tiger Woods never did, according to Steve Williams

Then within a matter of about 60 minutes he saw his lead evaporate through nine holes as Shane Lowry leapt out in front.

Lowry, who previously won The Open Championship, spent the week like a sleeping giant.

He slowly managed to claw back Berger and made the turn at 2-under par.

Lowry was one of a number of players who were in contention to win the $1.4million from the $8million purse.

Sepp Straka, Kurt Kitayama, Gary Woodland, Chris Kirk and Adam Svensson were all in contention going into the back nine.