Brooks Koepka has certainly been working out in the off-season. Well, at least Toptracer thinks so... 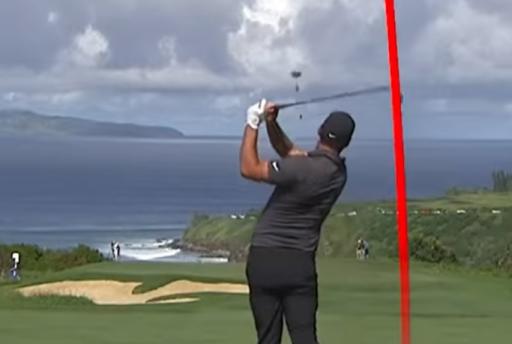 Brooks Koepka was seen hitting a pitching wedge that went more than 10,000 yards over the back of the green at the par-3 11th hole on day one at the Tournament of Champions at Kapalua.

Okay, we joke. But Toptracer certainly thought it did... aided by a serious malfunction in the system.

RELATED: JENA SIMS GETS NAKED TO CELEBRATE HER BIRTHDAY

RELATED: HOW MUCH ARE BROOKS KOEPKA AND JENA SIMS WORTH IN 2022?

As you will see, the tracer thought the ball had ended up the other side of the coast.

WATCH THE HILARIOUS VIDEO BELOW

Koepka actually found the green with his pitching wedge from 155 yards out and went on to two-putt for a par.

The four-time major champion went on to card a solid 5-under 68 on day one to put himself in position for a shot at winning his ninth PGA Tour title and first since the Phoenix Open last February.

Srixon Golf, who signed the services of Koepka at the end of 2021, replied with three strong arm emojis in the comments to the post.

UNBELIEVABLE: GOLFER MAKES A HOLE-IN-ONE AND AN ALBATROSS IN THE SPACE OF FOUR HOLES DURING HIS ROUND!

Here's how other golf fans reacted to the video:

"Bryson DeChambeau did it with a 64 degree."

"Happy Gilmore accomplished that feat no more than an hour ago."

"Those Srixons have definitely been jacked for 2022."

Get me some of those Cleveland and Srixon clubs please...

NEXT PAGE - PGA TOUR CADDIE ON TRYING TO POLICE PUTTING CHEATING: "GOOD LUCK WITH THAT!"