Phil Mickelson joined the commentary booth after his third round in the PGA Championship in 2020 and dad-joked Sir Nick Faldo. 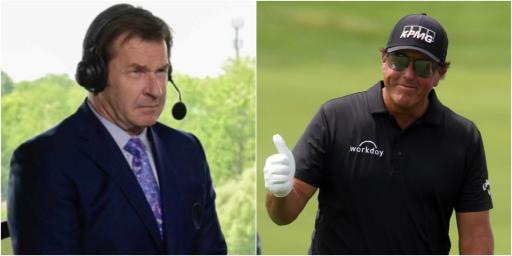 This great clip has resurfaced of Mickelson hopping in the booth after the third round of the PGA Championship.

Mickelson had shot an even par 70 at Harding Park in San Francisco and joined the CBS crew shortly afterward.

Faldo was expecting a little debrief but instead he got done over by a dirty dad joke delivered by Mickelson perfectly.

Related: Phil Mickelson bombs driver off the deck from 330...and hits the green!

Phil Mickelson dropping in for some analysis this afternoon; Nick Faldo wasn't quite ready for his opening dad joke pic.twitter.com/tNycbpWCeL

Of course, Faldo obliged and walked straight through much to Mickelson's pleasure.

"What's the third then?," Faldo said with a rather confused look etched on his face.

Mickelson is left with a massive grin on his face, knowing that he has caught the six-time major winner hook, line and sinker.

If you have got this far and still not managed to work it out, it has to do with the birds and the bees.

He also became the oldest player to win a major when he took down the PGA Championship last year at Kiawah Island.

Mickelson also hopped in the booth in The Match starring Bryson DeChambeau and Brooks Koepka.

He proved he has a future career in the booth if he so chooses.