WATCH: Bryson DeChambeau's EPIC STRUGGLE to get a volunteer to move out the way!

Bryson DeChambeau gets frustrated by a volunteer who doesn't quite understand what he wants at Torrey Pines. 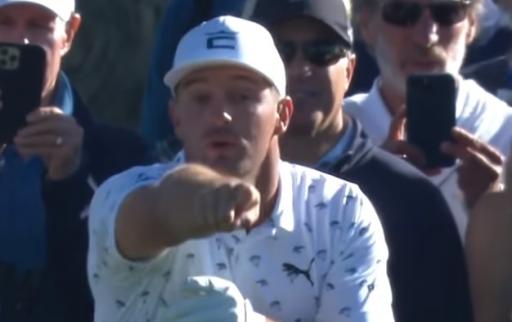 Bryson DeChambeau had a hilarious conversation with a PGA Tour volunteer who did not quite understand what he wanted to happen at the 15th on day two at the Farmers Insurance Open.

DeChambeau, who had been nursing an injured wrist all day at Torrey Pines, hacked out of the native area on the par-4 15th following an errant tee shot and he found the deep rough to the left of the fairway behind a tree.

To the volunteer's credit, he moved the crowd back further to the left to allow DeChambeau to play his third shot into the green.

But all DeChambeau needed now was the volunteer himself to move.

Only that message, from about 50 yards away, did not transcend.

"Sir, you're right in the way," said DeChambeau to the volunteer.

DeChambeau struggled for much of the round after battling his ongoing wrist issue but despite making birdie on the final two holes, highlighted by a hole-out birdie from the bunker at 17, he would card a round of 72 to finish 2-under par and miss the cut by one shot.

NEXT PAGE: JON RAHM AND JUSTIN THOMAS HIT THE FRONT AT THE FARMERS INSURANCE OPEN