World number one Jon Rahm and Justin Thomas made their move in the second round at the Farmers Insurance Open as Bryson DeChambeau battled a sore wrist. 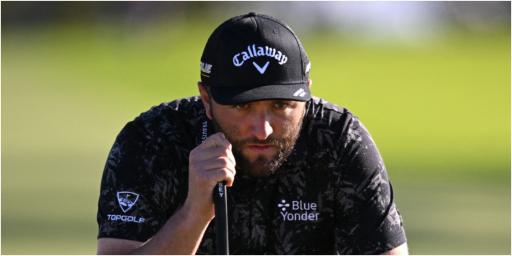 Rahm has cut grumpy figure over the last week or so, firing shots at the PGA Tour over their set-up of courses by making them "easy".

He stood by those words earlier in the week and even though he struggled to hit a fairway at Torrey Pines in his second round he went low.

After completing his second round it saw him reach 64-under par at the Farmers Insurance Open since 2017. No wonder he likes it here.

"I think the score would make you think I played a lot better than I did - not that it was bad - but I struggled to find the fairway," Rahm said.

"Happy with my putting today and happy with the way I managed the golf course," he told the Golf Channel.

Asked about his emotions, he said he was getting frustrated his tee shots kept going right but added: "Finally, on six I put it on the fairway."

Returning to the clubhouse the 26-year-old, who won his maiden U.S. Open title here, managed to grab three more birdies for a solid 65.

By day's end, there was a three-way tie for the lead at 13-under going into the weekend where the players will only play the South Course.

Flawless Thomas was in fine fettle. Ten birdies overall. No dropped shots. That's what made him the Players champion last year.

Rahm and Thomas, 28, are joined at the top of the leaderboard with Adam Schenck, who went extemely low with a superb 62.

"Obviously the score was great but I just had a lot more control over everything," Thomas told the Golf Channel after his 63.

"I was able to go on a bit of a roll," he added, who chipped in for birdie at the second and reacted with a muted celebration.

Elsewhere, Bryson DeChambeau looked like he was struggling physically. He was wincing in agony after almost every shot.

DeChambeau, 28, was forced to withdraw from the Sony Open earlier in the month with a sore wrist.

And at Torrey Pines it appeared it was still bothering him. He looked in agony at times. His approach at 13 was particularly bothersome.

At 15, DeChambeau snap-hooked his drive way left. He yelled fore. His drive only carried 272 yards. Something wasn't right.

"I don't think rythm and tempo is going to fix that one," Sir Nick Faldo said in the booth.

It left him deep in a ravine way left of the cart path. He hacked it out and said sarcastically: "That felt really good on my wrist."

He trunched away holding his sore wrist and probably should have just called it a day there and then and not risk further injury. He didn't.

Then he was embroiled in an hilarious exchange trying to get an official to get a cart out of the way.

After that, he appeared to take about 30 seconds telling said official to move out of the way. It was like a comedy sketch.

"No, no, no, YOU are in the way," he said. His tribulations continued and it ultimately led to a bogey.

At 17 it was no different. His tee shot hit the fairway but he led out an audible scream in agony.

He needed an eagle up the last to make the cut. He couldn't muster it despite finishing with two birdies.

Time for an appointment with the physio.

After 18 holes it looked as if Rickie Fowler had turned a corner and was convincing us he was returning to some form.

And he was well in with a shout of making a solid move away from the pack in his second round.

But what transpired was the stuff of nightmares for Fowler. Torrey Pines is an unforgiving beast at times.

It is not just a driver/wedge course as he well found out. A 1-over front nine was frustrating.

What is interesting is Fowler has got the old version of his Cobra driver and not the LTDx that DeChambeau is using.

A double at the par-3 11th will have enraged him. Then he dropped two more shots in as many holes.

It left him with a battle to make the cut. A battle that he would lose. He'll be back next week at Pebble Beach.

Blondes don't always have fun Brooks Koepka. We'll see you another time. Even par after 36 holes isn't going to cut the mustard.

Jordan Spieth also missed out on the 3-under cut line. Tony Finau will have a free weekend.

Jason Day, coming off the back of his worst year on tour, is 9-under thru 36 holes. Welcome back, Jason.

Next page: Sir Nick Faldo hits back at Rahm over "putting contest" comments