Jordan Spieth has missed the cut for the first time in 20 events at the Farmers Insurance Open, but his great streak was nowhere near Tiger Woods' made-cut record. 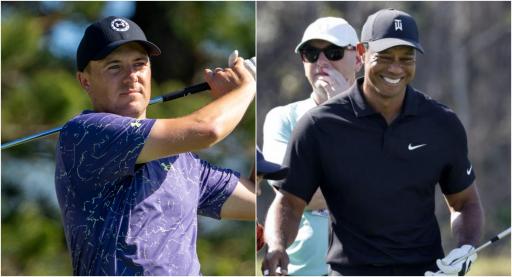 Jordan Spieth held the longest active streak of made cuts on the PGA Tour until he shot a poor 78 on Thursday at the Farmers Insurance Open.

Spieth, making his second appearance on the PGA Tour in 2022, began his week with a tame but solid round of 2-under-par on Wednesday in San Diego.

But things turned for the worse on the Thursday at Torrey Pines. He made five bogeys and a double-bogey to card 6-over-par and to finish on 4-over-par, well off the cut mark of 3-under-par.

Spieth's brilliant streak of 20 consecutive made cuts on the PGA Tour has come to an end. But if anything, this shows how incredible a player Tiger Wood was in his prime.

RELATED: WATCH: BRYSON DECHAMBEAU'S EPIC STRUGGLE TO GET A VOLUNTEER TO MOVE OUT THE WAY!

Spieth is a three-time major champion and a 12-time winner on the PGA Tour. He is one of the best players of the modern era, but not even he could get close to this amazing record of Woods.

From 1998 to 2005, Woods made 142 consecutive cuts, just 122 more than Spieth's run. He is one of only three players in the history of golf, along with Byron Nelson and Jack Nicklaus, who have triple-figure marks.

In this seven-year stretch, Woods won 36 tournaments and eight major championships. The run came to an end at the AT&T Byron Nelson in May 2005.

As for Spieth, 2021 was a much improved season for the 28-year-old. After missing the cut at this tournament last year, he almost dropped out of the world's top 100 players.

But this seemed to provide inspiration. Spieth made three top-5 finishes in his next four starts and won the Valero Texas Open as well. He finished tied third at The Masters and second at The Open Championship.

He won't be winning for the 13th time this week on the PGA Tour. After 36 holes, Jon Rahm, Justin Thomas and Adam Schenk share the lead on 13-under-par.